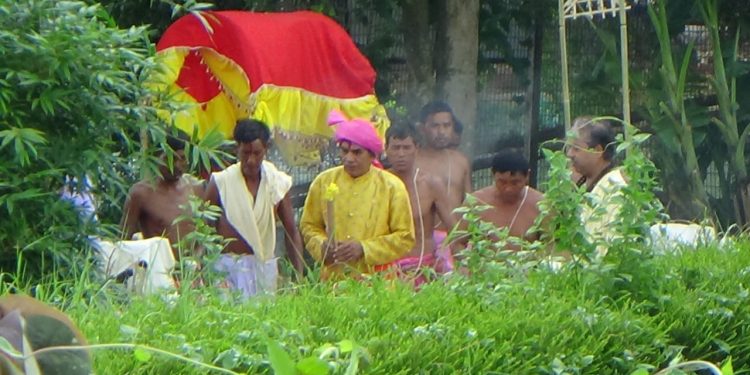 Ker puja is the most peculiar festival of Tripura.

On Tuesday the traditional Ker Puja is being held at the premises of Ujjayanta Palace.

Ker is considered as a Vastu Devata of Tripura’a Royal family.

Before the Ker puja the district magistrate of West Tripura district issued an order and according to the order nobody can enter in the area of particular surroundings which is known as ‘ker’ during the two and half days of puja.

The literal meaning of ‘Ker’ in tribal Kokborok language is ‘specified area’.

There is no place for death, birth, or recreation in that particular surroundings.

If there is any ill or pregnant woman, he or she should move out of that surrounding before the puja started.

It may sound strange but no pregnant woman or critically ailing person is allowed in the sacred puja precinct.

Anyone who violates is made to pay a fine and the puja starts from scratch.

According to the royal family tradition Ker puja includes offerings, sacrifices, and a prescribed boundary which both safeguards people from calamities and saves people from external aggression.

The puja was initiated by the King of the State.

For two and half days during the festival, entrances to the capital are closed, and participants, including the reigning sovereign, are not allowed to wear shoes, light a fire, dance, or sing.

Steeped in intricate, time-honoured rituals, this mega tribal event is about well-being and warding off evil spirits.

And this royal traditional festival is all set to begin from Friday night.

Before the independence, the kings observed Ker Puja but now state government organizes it on behalf of royal family.

The rituals are carried out at government expense as per an agreement between the Tripura government and the erstwhile royal family.

The Tripura police offer a gun salute before the puja begins.

A structure constructed with green bamboo poles serves as the deity for the Ker Puja.

The chantai or head priest is regarded as the king on the occasion.

The head priest and his associates light up the fire by rubbing bamboos.

The tribals and people around the Ker Puja areas carry the fire to their homes believing that it would ensure their well-being and thwart the evil spirit.

The royal dynasty perform Ker Puja for the welfare of the people, praying against calamities and external aggression.