In his FIR, Jena said the Tripura University VC, Prof MK Singh, has committed a criminal offence by attending office on July 17 even after knowing that one of his sons, who have returned to Agartala on July 14, tested COVID19 positive. 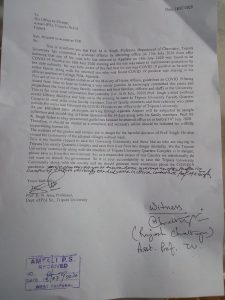 Jena said the VC was fully aware of this fact that his son tested COVID19 positive as he and his entire family along with his returned son, who was found COVID19 positive, was staying in his official quarter at College Tilla, Agartala.

This act is the violation of the Home Ministry guidelines on COVID19, which are issued from time to time, said Jena.

Jena said “holding a very senior position he knowingly committed this crime and jeopardised the lives of many faculty members and their families”.

Jena alleged that after knowing everything, Prof Singh also went to the library on July 16 without wearing any mask.

Later he visited the quarter of the faculty members in the University campus.

He also visited the community of the adopted villages without wearing a mask, Jena claimed.

“As per the prevalent rules, passengers arriving through Agartala Airport will be subjected to sample collection and should stay at home quarantine for 14 days along with family members. Professor MK Singh failed to obey government guidelines because he attained office,” Jena added.