Protestors pay tribute to the victim of the firing against anti-Bru protestors. Image credit - Northeast Now

People in Kanchanpur took out a rally with the body of Srikanta Das, who was killed at Panisagar during a firing at protestors, who oppose Bru refugees’ resettlement in North Tripura.

The people of the area took to the street with candle lights and paid tribute to the firing victim on Sunday evening.

Two persons lost their lives during a clash between security personnel including Tripura State Rifles (TSR) and anti-Bru protestors at Panisagar on Saturday.

Later, Tripura State Rifles (TSR) opened fire at the protestors to disperse them in which Srikanta Das was killed.

After completion of the autopsy, the body of Srikanta Das, a resident of Kanchanpur, was handed over to his family members. 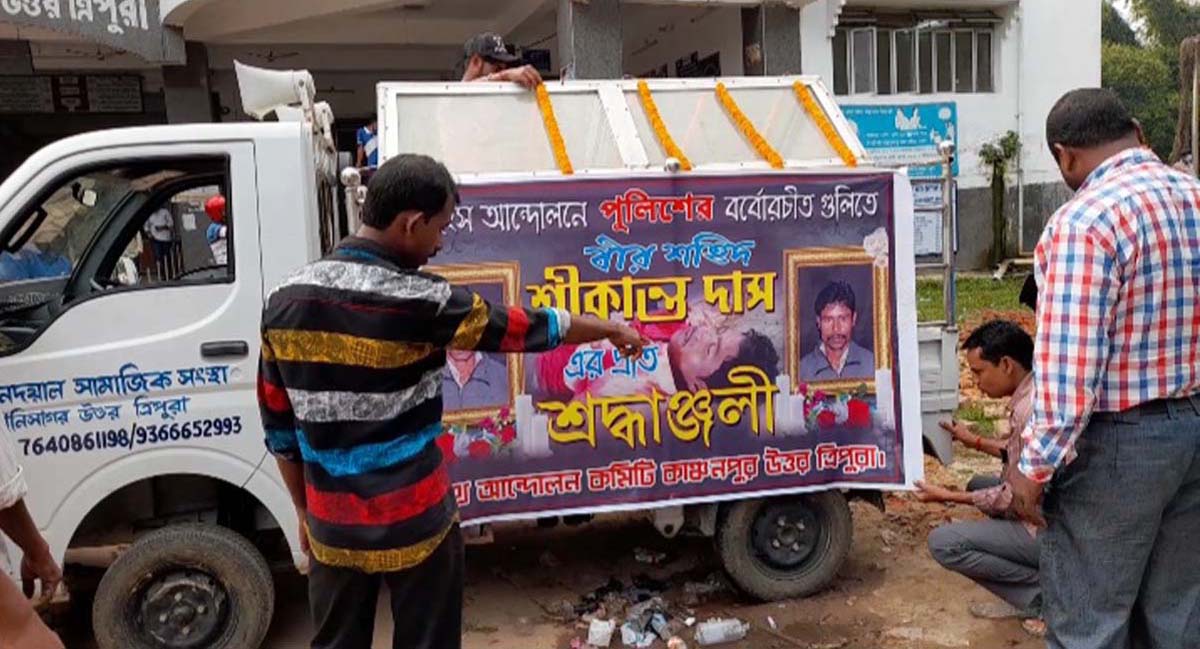 A fire service employee, identified as 40-year-old Biswajit Debbarma, also lost his life in the clash.

A total of 7 civilians and 15 other people including policemen, fire service personnel and government officials were hurt in the incident which took place on Saturday morning.

The blockade on NH-8 was launched by the Joint Movement Committee, which has opposed the re-settlement of Bru refugees in North Tripura.

However, prohibitory orders were issued by the sub-divisional magistrate of Panisagar under Section 144 of CrPC to prevent unlawful assembly.

The protestors, ignoring the prohibitory orders, proceeded towards Chamtila to impose the blockade.

The police forces, including Tripura State Rifles personnel, deployed at Dolubari, tried to stop the agitators from proceeding.

But the security personnel were outnumbered by the agitators and failed to prevent them from proceeding.

The police resorted to first baton-charge and teargas to disperse the protestors.

But that could not prevent the crowd from proceeding towards Chamtilla from Dolubari.

“At Agnipasa, some protestors attacked the Sub-Divisional Police Officer (SDPO) and his security guards. The security personnel had no other option but to open fire leading to the death of 46-year-old Srikanta Das,” police sources said.

The SDPO, Panisagar and his security guards were seriously injured in the attack.

Three government vehicles including, police bus, escort vehicle, were damaged in the attack by protestors.

Prohibitory orders under section 144 of CrPC have been imposed in both Kanchanpur and Dharmanagar sub-divisions.