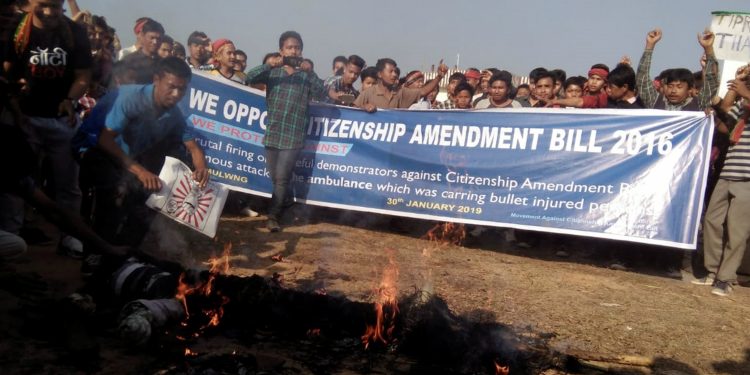 This is the first time all non-BJP and non-CPI (M) parties are taking part in a political programme together on the issue of Citizenship Amendment Bill 2016, already passed by the Lok Sabha.

As part of the protest, a mega procession started from Dasharambari area in Jirania sub-division in which thousands of tribals took part as they raised ‘Bangladeshi go back’ slogans.

Speaking on the occasion Pradyut Kishore Debbarman, who also is the royal scion said, “All of us across political lines have got together to protest as one voice that the indigenous people of Tripura are not will to allow this Bill to pass in the Rajya Sabha or by an ordinance. We are here as one community, as Tiprasa because we oppose this Bill.”

Debbarma added, “We are first a community, state, a country and then we are a political identity. We are all united here across political lines to tell Narendra Modi that you cannot pass a Bill like this without taking us into consideration. We are Indians and we love our county, please first look after us then look after people across the border.”

The Congress ST cell also took part in the programme, however, official  IPFT partner in the state’s coalition government, though stayed away from the protest, Mebar Kumar Jamatya, IPFT secretary and Tribal Welfare Minister, is currently in Guwahati to take part in the conclave of all tribal based regional parties against the Citizenship Amendment Bill.