Tripura’s banned militant group National Liberation Front of Twipra-Nayan Bashi faction (NLFT) expressed its satisfaction over the tripartite talks with the Union and the State governments.

This was announced through a press release of the militant group’s information and publicity secretary, D Khashmai.

Though where the talks took place was not disclosed, however, earlier similar talks took place in Shillong and New Delhi where a former top militant turned legislator of Tripura and Mizoram also took part as a mediator. 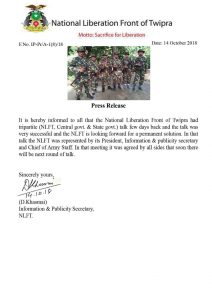 In its latest talks, the NLFT supremo, chief of Army staff and information and publicity secretary of the outfit took part.

The NLFT release which interestingly also had a photo attached showing some of its cadets with AK series guns and to reveal that it still hold power.

However, it is learnt that the outfit is looking forward for a permanent solution to its arms struggle and return to the mainstream and lead a normal life but, the release added, will happen only through more such dialogues scheduled very soon.

Though majority of the militant cadets have surrendered and only a handful of them are still there across the border in Bangladesh where the Sheikh Hasina government has repeatedly been saying about zero tolerance to militants and shall not allow to use it’s land for militant activities.