Tripura: Last stage of election campaigning; no excitement among Bru’s for voting 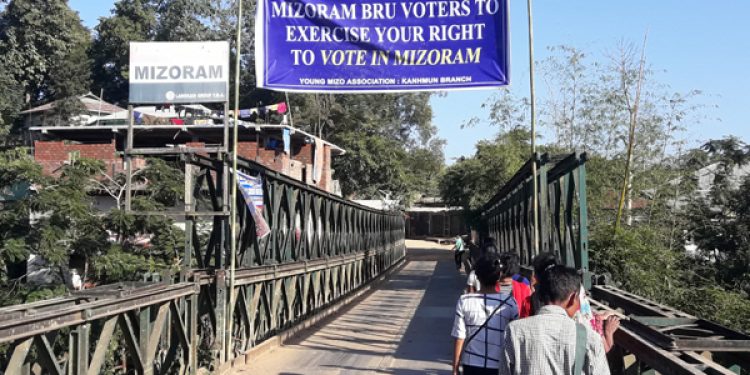 Even on the last day of the campaign for the Mizoram Election, no excitement of the campaign was seen at the Bru Reang refugee areas located in the North District of Tripura.

The Election Commission of India has decided to hold polling for 11,323 Bru refugees residing in Tripura at the inter-state border village of Kanmun in Mamit district of Mizoram.

Kanmun is an inter-state border village between Mizoram and Tripura.

The six camps of the Bru refugees identified as Naishingpara, Ashapara, Hezachara in Kanchanpur Sub Division and Casco, Khakchang, Hamcapara, Navojoypara are located between two km and 10 km from the inter-state border between Tripura and Mizoram.

The Bru refugees will be voting for 9 assembly constituencies represented by 44 candidates and so far no candidate have campaigned for the party.

There are total 40 assembly constituencies in Mizoram. However, the Reang refugees will be casting vote for three district of Mizoram including Mammith, Kalashiv and Lungle.

However, NEDA Chairman Himanta Biswa Sharma has also campaigned for the party where he claimed that if the BJP came to power in Mizoram and the problem of the Bru refugees will be solved.

However, training is also being given on the use of the EVM and VVPAT.

Although, the election campaign is at the last stage there is no excitement seen among the Bru refugees for the vote casting.