Train services hit in north Assam due to flood

Flood has affected over 4,500 people of 29 villages in Dhemaji district 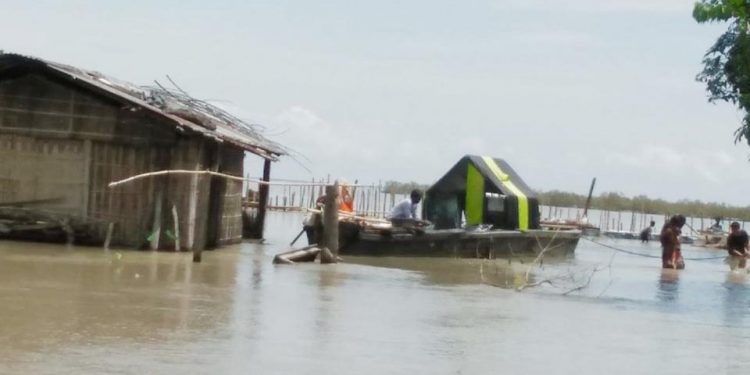 Train services in north Assam have been affected as the NF Railway suspended several passenger and goods trains plying along Rangia-Murkongselek section after flood water damaged the railway line.

Overflowing water of Jiyadhal river in Dhemaji damaged the railway embankment and approach bridge (Bridge No- 693) at Jyadhal Bhojugaon affecting the train services for last couple of days.

The NFR authority suspended a number of passenger and good trains plying along the line.

The NFR officials, however, informed that the damaged portion was repaired this afternoon and resumed all rail services from this evening.

Earlier too, flood water damaged same portion of the Rangiya-Murkongselek BG railway on August 1 this year and snapped rail communication along the route.

Although the monsoon flood in Dhemaji district was over, heavy and incessant rain in Siang valley yet again created flood fury and affected human habitation besides damaging large area of standing paddy crops in the district.

The flood has affected over 4,500 people of 29 villages in Dhemaji, Sisiborgon and Jonai revenue circle and left a trail of devastation.

Flood water entered through the breached portion of river dykes at Berachapori and area in Jonai revenue circle and affected people of 21 villages, beaten down large area of Sali paddy cultivation.

As per report of District Disaster Management department, flood water is receding from after weather condition is improved this morning.

It is said that the situation is depending upon the weather in the coming days.

Heavy rainfall during autumn in the region is an unnatural phenomenon.

Residents of the area are worrying over the contrasting weather condition as the untimely rain severally hit harvesting of sali crops and vegetable cultivation.