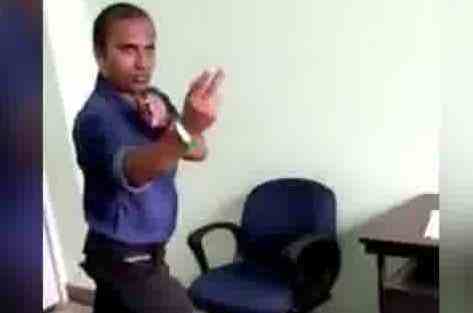 A suspended teacher of Tripura University along with his accomplice has attacked the headquarters of the Tripura Times, an English daily newspaper published from Agartala.

Police officials said suspended Tripura University professor Moti Kapoor along with his accomplice on Wednesday night carried out the attack following the publication of a report about a video clip.

In the video clip, which went viral on social media, the suspended teacher Kapoor was seen showing Karate moves and singing in a classroom of the university.

Immediately after the incident on Wednesday night, a complaint was lodged with West Agartala police station, accusing Kapoor and his accomplice Samar Chakraborty as well as a “group of unidentified miscreants” of attacking the journalist.

Senior journalist Joydeep Chakraborty and Soumen Bhattacharjee, the manager of that newspaper, were manhandled by them.

The miscreants led by Kapoor also ransacked a chamber of Justice Arindam Lodh of Tripura high court who has inherited ownership of the newspaper from his late father, senior advocate Apangshu Mohan Lodh.

West Agartala police station officer-in-charge Debaprasad Roy said that they have raided many places to nab the culprits involved in the incident.

All the police stations of the state have been alerted to arrest Kapoor and his accomplice.

Kapoor taught sociology in the university.