BJP leader Subramanian Swamy has lodged a petition before Prime Minister Narendra Modi against the Times of India Group owners.

Swamy has sought a probe by various investigation agencies into huge tax evasion and money laundering by Times of India Group owners through shell companies.

The BJP leader in his petition to Modi alleged that the Times of India Group shareholders have floated several shell firms and are involved in dubious buyback of stock exchange-listed shares from minority shareholders in covert ways which caused huge tax loss.

The Times of India Group shareholders are Samir Jain, Vineet Jain and their mother Indu Jain.

The PM has been urged to direct Enforcement Directorate (ED), the Central Bureau of Investigation (CBI), Income Tax, the Securities and Exchange Board of India (SEBI), Department of Revenue Intelligence (DRI), and Serious Frauds Investigation Office (SFIO) to probe into the alleged frauds. 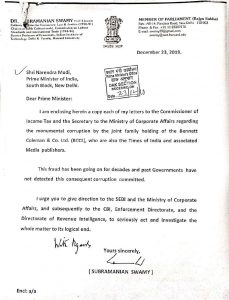 In the petition, Swamy said he also enclosed copies of his letters to the IT commissioner and the secretary to the ministry of corporate affairs regarding the “monumental corruption by the joint family holding of the Bennett Coleman & Co. Ltd. (BCCL), who are also the Times of India and associated media publishers”.

“This fraud has been going on for decades and past governments have not detected this consequent corruption committed,” said Subramanian Swamy.

In the petition to the PM, Swamy said: “I urge you to give direction to the SEBI and the Ministry of Corporate Affairs, and subsequently to the CBI, Enforcement Directorate, and the Directorate of Revenue Intelligence, to seriously act and investigate the whole matter to its logical end.”

In the 26-page-long petition, Subramanian Swamy listed out various covert ways of tax evasion and money laundering through shell firms by the Jain family members.

The Times of India Group is the media partner of the proposed 65th Filmfare Awards, 2020, scheduled to be held in Guwahati on February 15.