Stop, shop and pay but don’t look for keepers Aizawl-Champhai road in Mizoram

A traveller shopping at Nghahloh Dawr along the Aizawl-Champhai road. Nghahloh Dawr is the local term for a shop without a keeper. Photo: S Hmar

There are shops without keepers and popular with people who trudge long distances to make purchases and pay up promptly, displaying an unusual honesty not seen even in manned shops. It has become a trend for busy farmers along the Aizawl-Champhai road who cannot afford to employ somebody to run their shops.

Located in the midst of lush forests, about 70 km from Aizawl between Seling and Keifang villages, the shops have been one of the main attractions of weary travellers on this route.

It takes more than five hours of drive from Aizawl to reach these areas on the Northeastern fringes of Mizoram, bordering Assam.

But somebody willing to buy some green vegetables, fruits or eggs along the route can make a quick stop at various Nghahloh Dawr, which is the local term for shops without keepers. 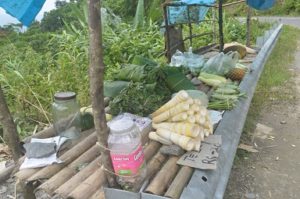 This unusual ”shops without keepers” was started by a 29-year old, Vanlaldika, who lives with his wife and children almost 30 km away from the nearest village. The shop where he never sits has become his main source of income for the past three years. Seeing his success, farmers near the highways across Mizoram have also started such shops.

Early in the morning, Vanlaldika puts all the vegetables and a small moneybox in the shop and leaves for his garden about a kilometre from the place.

”No one steals my vegetables. I fix the rates and place a small cardboard box near the items. People, especially travellers, often stop, choose and pick the vegetables, fruits and all they need and put the money in the box before leaving,” Vanladika said.

”If they don’t have change, they even take it from the box,” he added.

”Most of the time I have to work in the vegetable garden and I hardly have time to sit in the shop,” he said adding, ”on an average I get anything between Rs.400-500 per day.”

Asked if the money could be stolen, Vanladika said, ”Somebody has stolen money from there only once in the past three years and it was the last mishap.

”Sometimes, the travellers have been very generous and often I get more money than what my fruits and vegetables were worth,” he said, adding the area is an epitome of peace and calm.

Like Vanladika, for years now, 45-year-old Mawia has also maintained faith in humanity. He trusts all those who flock to his shop, enough to leave it open for them to pick up what they want and drop the money into the bowl of faith.

”We are so proud of him. Mawia keeps himself busy looking after his ailing mother. He just opens his shop and then makes his way to his house for various works,” Lalrinsanga says, after picking up some vegetables from the shop, calculating the cost and dropping Rs.20 in the bowl.

Now there are over a dozen unmanned shops along the highways in Mizoram. Farmers working in the fields now can concentrate on their work without any worries while money comes pouring in.