A cultural procession being taken out as a part of golden jubilee celebration of Assam Agricultural University in Jorhat on Tuesday. Photo credit: UB Photos

Around 3000 people participated in a cultural procession here on Tuesday to celebrate the golden jubilee year of Assam Agricultural University.

The celebrations commenced on April 1, the foundation day of the University with the inauguration of a new arched gateway by the vice chancellor K M Bujarbaruah. 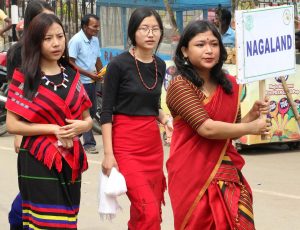 The procession led by the vice chancellor  and comprising students and faculty decked up in traditional attire of the seven  sister states Assam,  Manipur, Meghalaya,  Tripura,  Arunachal Pradesh,  Nagaland,  Mizoram and one brother,  Sikkim and tableaus depicting the highlights of the University and agriculture activities,  colourfully wended its way through the main thoroughfares of the town.

The University has had its ups and downs, losing its autonomy to the state in matters of recruitment and cutting down of posts.

The university was in a financial morass from 1995 to about 2010 with a deficit running into crores when the current vice-chancellor took over. 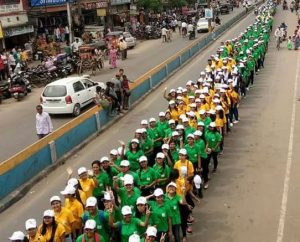 The staff did not get regular salaries more than Rs 30 crore in research funds from ICAR, the research body to which AAU is affiliated had been diverted and the demoralized teachers did not have proper laboratories or incentives.

Under the stellar leadership of vice chancellor Bujarbaruah it obtained its accredited status and was elevated to the top position among Agricultural institutes in the country by winning the prestigious Sardar Patel Outstanding Institute award in 2014. It was earlier at the bottom of the list.

The University has witnessed a sea change   in research, extension and studies, besides the tie-up with foreign universities like Cornell University, USA under Bujarbaruah.