Special attention to be paid for developing sports in Tripura: Minister

Newly appointed Tripura Sports Minister, Manoj Kanti Deb on Saturday as a part of his regular visit, visited the Regional College of Physical Education Sport Complex at Panisagar in North Tripura district of the State.

As a part of the visit, Minister Manoj Kanti Deb was also felicitated by the officials of the sports complex. 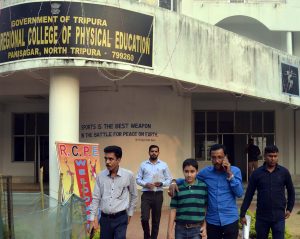 Talking to media on the side-lines of the programme, Minister Deb stated that under the Left Front regime in the State, the sporting talents were never given a platform and conspiracy was high to halt any progress in the field of sports.

“But from now on the talented sports personnel will be given ample scope irrespective of cast and creed,” the Tripura Sports Minister reiterated.

He also said that special attention will be paid for developing the sports arena of Tripura in the coming days.