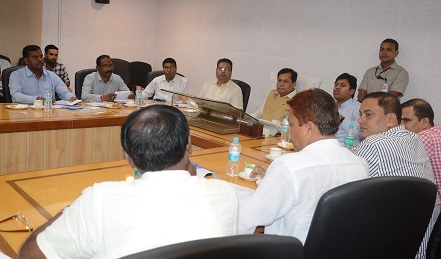 Assam Chief Minister Sarbananda Sonowal chairing a meeting to review schemes for the welfare of people belonging to tea tribe community at the conference room of Janata Bhawan in Dispur on July 10, 2018.

In an attempt to bring in welfare of tea tribe communities in the agenda of priorities and expedite their development, Assam Chief Minister Sarbananda Sonowal asked the Directorate for Welfare of Tea tribes, Assam to re-activate and strengthen skill development centres in the tea garden areas.

Chairing a meeting at the conference room of his office in Janata Bhawan on Tuesday, Chief Minister Sonowal while reviewing the schemes for the welfare of tea tribe communities in the State, said that the skill development centres in 19 tea garden districts in the State need to be strengthened to render skill development training to the youth.

“Enabling the skill centres to live up to their mandate will not only hone the income generating faculty of the youth, but also increase their employability”, Sonowal attributed.

Moreover, taking a stock of the progress of the schemes meant for the people belonging to tea tribe community being rolled out for their development, Chief Minister Sonowal asked Tea Tribe Welfare Minister Pallab Lochan Das to develop a fool-proof method to see that no names are left out while transferring benefits under Chah Bagicha dhan Puraskar Mela.

He also asked the MLAs belonging to tea tribe dominated areas to see that all rightful beneficiaries get financial benefits under the scheme.

Sonowal also took stock of the implementation of daily wage hike of tea garden workers and bring in parity of the wages in Barak and Brahmaputra Valley. Moreover, the schemes like Prime Minister Surakshya Bima Yojana and Prime Minister Jiban Jyoti Bima Yojana, under which the tea labourers having bank accounts would be availing of life insurance and the annual premium of Rs 342 per scheme per beneficiary would be paid by the state government have also been discussed.

The CM asked Principal Secretary, Finance to take schemes to their logical conclusion.