Before the arrival of Trinamool Congress leaders at the Silchar airport on Thursday and the subsequent show off between the administration and the TMC leaders, Congress MP from Silchar Lok Sabha Sushmita Dev had requested the state administration to allow the TMC delegation ‘if they want to meet the people without breach of peace and tranquility’.

Sushmita, before the arrival of TMC delegation at the Silchar airport, wrote a letter to the chief secretary of the state T Y Das in this regard. 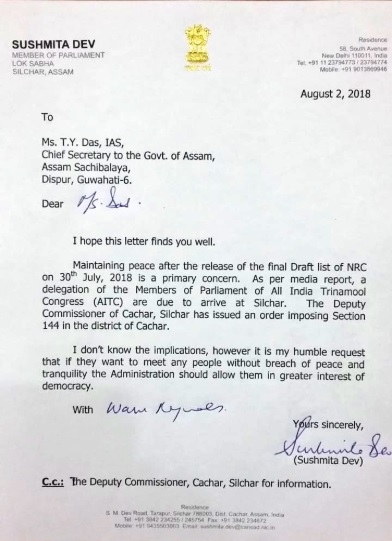 In her letter she said, “Maintaining peace after the release of final draft list of NRC on 30th July, 2018 is a primary concern. As per media report, a delegation of the Members of Parliament of All India Trinamool Congress (AITC) are due to arrive at Silchar. The Deputy Commissioner of Cachar, Silchar has issued an order imposing Section 144 in the district of Cachar.”

She requested the chief secretary of Assam to allow the Trinamool Congress leaders to meet any people without breach of peace and harmony in greater interest of democracy.

“I don’t know the implications, however it is my humble request that if they want to meet any people without breach of peace and tranquility the Administration should allow them in greater interest of democracy,” Sushmita wrote in her letter to Assam chief secretary T Y Das.