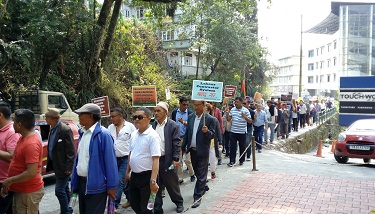 Members of Sikkim Krantikari Morcha taking out ‘March for Justice’ in Gangtok to press for their seven-point demands on March 24, 2018. Photo: Sagar Chhetri

Sikkim Krantikari Morcha on Saturday took out march for justice in the capital to press for its seven-point demands.

The leaders, workers and supporters of SKM party from different parts of the state walked together along the National Highway during the ‘March for Justice’  from Saraswati Mandir in 5th Mile Tadong till Bhanu Park in Zero Point.

The rally was led by the SKM acting president and MLA, Kunga Nima Lepcha and participated by the chief coordinator and MLA, Sonam Lama, working presidents, MP Subba and Navin Karki and other leaders, workers and supporters of SKM party.

Interestingly, state BJP president DB Chauhan also joined them at the point where the rally had culminated.

After the rally, an SKM delegation submitted a memorandum on its seven-point demands to the Governor.

The seven-point demands included to immediate retirement of the government employees on extension and re-employment to provide regular jobs to educated unemployed youths, to regularise employees who have already worked more than five years on muster roll, ad hoc, coterminous and contractual basis and to regularise home guards who already have rendered five years of services along with arrears.

Other demands included abolishing contract system in private companies, providing regular jobs in government departments after taking interview, giving preference to local youths in contracts and supply works and cancellation of pilots provided to the ministers and others.

In his address, SKM acting president emphasized participation of everyone to provide justice to all sections of the society. He added that it was the high time for the people to come together in the interest of Sikkim and its people.

BJP state president Chauhan appreciated the initiative of SKM party and expressed his hope that the rally would send positive message to the people in different corners of the state. He also assured to provide all possible support in this mission of the SKM party.