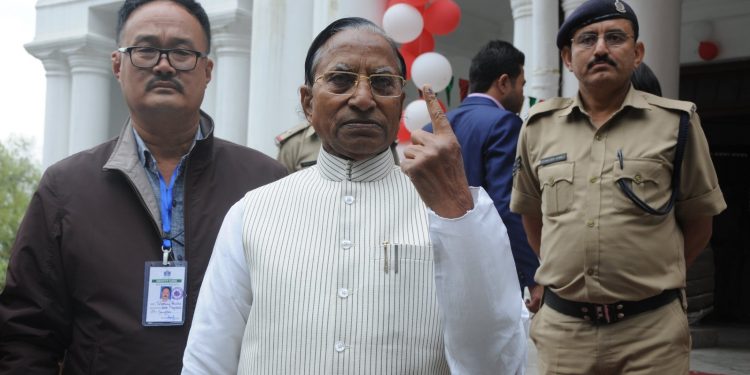 Sikkim Governor Ganga Prasad after casting his vote in the by-elections on October 21, 2019. Image: Northeast Now

A month long ‘Shrawani Parva’ in devotion of Lord Shiva commenced at Siddheshvara Dham in Solophok of Sikkim on Monday.

The Governor along with the dignitaries visited Siddheshvara Dham complex and offered his prayers and attended the hawan performed at the complex.

In the morning hours, minister Kharel along with other devotees from in and around Namchi and Namthang also visited the Shiva temple at Kholaghari where he offered his prayers and carried the holy water to be offered at the main shrine.

It may be mentioned here that the auspicious month of Shravan or Sawan has started from July 17.

Devotees in large numbers throng Lord Shiva and Goddess Parvati temples in huge numbers and pay their obeisance in the form of prayers and offerings.

It may also be noted that during this month long celebration, on each of the four Mondays, Rudraabhishek, Hawan and Maha Aarati is organized respectively.