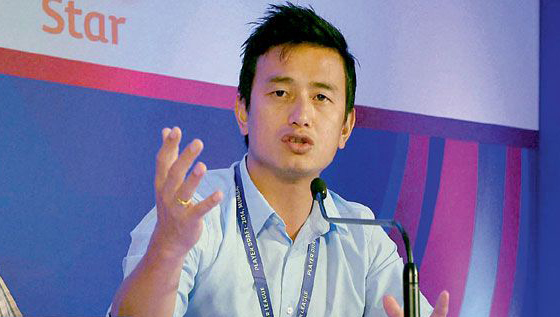 Slamming footballer-turned-politician Bhaichung Bhutia for “denigrating” Sikkim and its stable government of 24 plus years, the ruling Sikkim Democratic Front (SDF) on Thursday asked him to do his “homework” to improve his “understanding of the state” as he has “forgotten his roots after having stayed elsewhere for long”.

Sikkim’s sole MP P.D. Rai, also an SDF spokesperson, alleged that Bhutia has been propped up by some elements in the BJP to take on his party, and said “politics of opportunism” will have no takers.

Rai’s sharp criticism of Bhutia came in the wake of the Hamro Sikkim Party (HSP) vice president’s stringent attack on the SDF government led by Chief Minister Pawan Chamling in an interview to the online news portal, The Wire.

“We have full respect for Bhaichung Bhutia as a footballer or as a star as he likes to call himself. But as a leader of a political party in Sikkim, whatever he has said, it is clear he has no understanding of real politik,” Rai told IANS.

Taking a dig at Bhutia for saying that his earlier stints in politics (as Trinamool Congress candidate twice in West Bengal, when he lost on both occasions) “were more as an outsider, more as a star contesting an election”, Rai said, “Let him preach all this to Trinamool. I am sure they will take him to the cleaners.”

On Bhutia saying that his party can think of having a truck with the BJP “only if it throws out the SDF from the existing alliance, Rai said, “He has been propped up by some elements in the BJP, though he doesn’t have the full support of all sections of that party.”

“But we really don’t understand his statement, as SDF has already announced that in 2019 we are going to contest the assembly and parliamentary elections on our own. So Bhutia should have no problem in forging an alliance with the BJP.

Terming Bhutia’s belittling of the state’s success in organic farming as a manifestation of his “little knowledge of the public policies of the SDF”, Rai reminded him that Sikkim has recently bagged the coveted Future Policy Award 2018 from the United Nation’s Food and Agriculture Organisation for adopting the world’s best policies promoting “agroecological and sustainable food systems”.

“I’m sure they must have done some homework before giving the award. Even Prime Minister Narendra Modi mentioned the award in his Mann Ki Baat. Bhutia is well advised to read up on all of these,” said Rai.

Ridiculing Bhutia, he said, “Taking a pot shot and scooting can only come from opportunistic leaders like him.”

Accusing Bhutia of denigrating a stable border state, Rai said Sikkim has seen peace and progress for the last 24 years.

“He has missed the goalpost twice. He is going to miss it thrice and many more times. He needs to do a lot of homework. Having stayed away from the state for long, he seems to have forgotten his own roots,” Rai quipped.