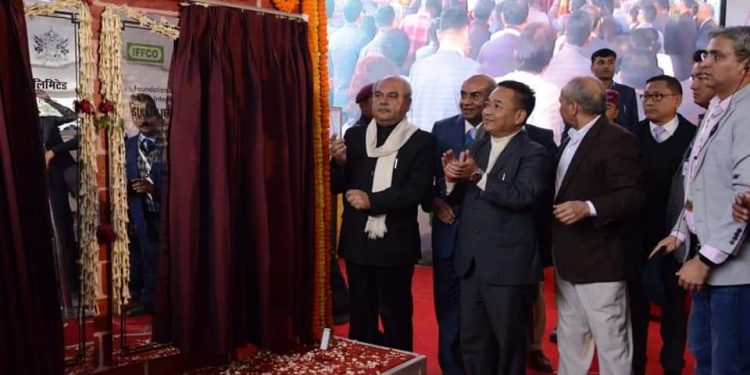 Union minister for agriculture & farmers’ welfare, Narendra Singh Tomar, was also present as the chief guest of the function at Rangpo in East Sikkim.

It has the target to promote and market the organic produce of the country and especially from Sikkim and other north-eastern states of India.

The major commercial crops in which Sikkim IFFCO will operate in the State are ginger, turmeric, large cardamom and buckwheat.

It is informed that the initial cost of the project is Rs 50 crores and the manufacturing is scheduled to start from December next year.

It is informed that all SIFCO products will be certified 100 per cent organic.

The upcoming integrated organic food processing units at Rangpo is also the country’s single largest organic processing unit in Sikkim and it has been believed that the project will boost the organic trade with Americas and European Union.

It is informed that Sikkim IFFCO has already signed two MOU’s one with Blossoms Biodynamics, USA for the utilizing their marketing and distribution in the North American markets and other with Centar Dr Rudolfa Steinera, Croatia for marketing its products in Croatia and the European Union.

In his address, the union minister stated the Centre would provide all possible support for the progress of Sikkim and its agricultural development.

He further assured that the Centre has been working in the interest of farmers of Sikkim and to further development of Sikkim organic farming.

He mentioned that the upcoming processing unit will help to transform the life of farmers by increasing their production and by taking local organic produce of Sikkim in the international market.

Tomar congratulated the chief minister and people of Sikkim for the new upcoming processing unit in the State.

He also appreciated the initiative of IFFCO coming forward to set up the processing unit in the State.

He mentioned that Sikkim has created its own identity in the organic farming.

He congratulated farmers and people of Sikkim for their contribution to make Sikkim an organic state.

He mentioned that this project was in the line of the vision of the Prime Minister Narendra Modi’s strategic thinking and planning to boost organic farming in the country hence doubling farmer’s income in 2020.

Addressing the gathering, the chief minister mentioned that agriculture was a priority sector of the State Government.

He mentioned that Sikkim was the first organic state of the country and the State government has been committed to attain sustainable agriculture and to promote the green Himalayan economy.

He mentioned that the State Government has been working towards the target of doubling income of farmers by increase the organic produce of the State and to provide more benefits to farmers.

Tamang expressed his hope that the project will help to provide the right price to local farmers of their organic produce.

He further expressed that Sikkim IFFCO Organic Limited would help to fulfill all hopes and aspirations of farmers of Sikkim.

He mentioned that this joint venture was a step towards the direction of a safer food supply chain and environment protection.

The chief minister mentioned that this unit in the State would help to take organic produce of the State to the international market.

He mentioned that not only the people of Rangpo but the people of the entire State would be benefitted with this project in near future.

He mentioned that the State government has already asked IFFCO to give preference to locals of the area in different opportunities created by the processing unit.

Sikkim Legislative Assembly Speaker, LB Das, who is also the Area MLA, urged IFFCO to give preference to local people of the constituency in different non-technical works and employment opportunities create by the unit.

Likewise, state agriculture & horticulture minister, Lok Nath Sharma said the laying of the foundation stone for the unit was the historic moment for the State and would help to take the organic farming of the State to the new height.

He expressed that this processing unit would help to provide the right price to farmers for their produce and would increase the production to manifolds.

He thanked IFFCO for setting up the unit in the State. He also places some demands to the Union Minister in the interest of farmers of Sikkim.

Earlier, IFFCO managing director, Dr U S Awasthi thanked the Centre and State governments for understanding the importance of the organization by provided all support in this project.

He mentioned that this unit was one of the modern organic processing unit in the world which will be running mainly on the solar energy.

He mentioned that Sikkim IFFCO will be capable to promote certified organic products worldwide and to enhance 100 per cent organic image of Sikkim globally.