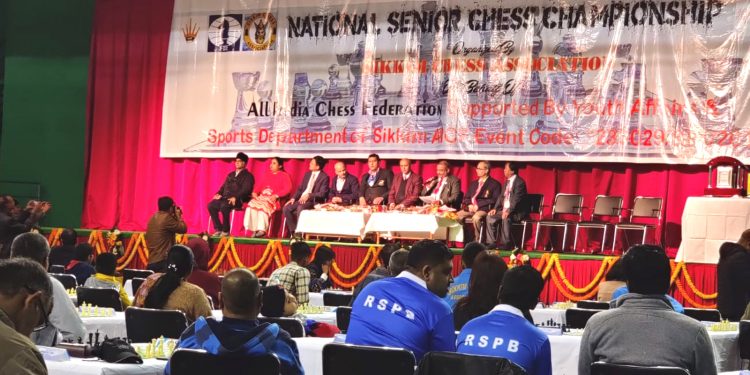 A total of 192 top-rated players from different states, union territories, and PSUs have participated in the championship.

The championship was inaugurated by the secretary to sports & youth affairs, Kuber Bhandari.

The ten-day-long championship has been organized by the Sikkim Chess Association (SCA) on behalf of the All India Chess Federation (AICF) and supported by the sports & youth affairs department, the government of India.

In his inaugural address, Bhandari said such a prestigious national championship in the state would help in the promotion and development of chess in Sikkim.

He further expressed that the presence of more than 40 GMs and IMs of the country in the championship would encourage and motivate budding chess players of Sikkim.

Bhandari stressed on the need to include chess in the school curriculum for the holistic development of the children.

Earlier, the Chief Arbiter, Dharmendra Kumar, expressed that it was a big achievement for Sikkim to host the prestigious and top-tier chess championship of the country.

The inaugural function was also addressed by a GM, Abhijit Kunte.

The inaugural function was followed by the commencement of games in the championship.

The championship will follow the Swiss League System of 11 rounds.

The championship will conclude on December 19.

Speaking to media persons, SCA general secretary Mahendra Dhakal said the presence of the full strength of top-rated chess players of the country has raised the standard of the championship.

Dhakal mentioned that the championship was also a good opportunity for local chess players to improve their FIDE rating and even to get IM or GM norms if they are able to take points from them.