In his short address, Rahman said, “Sikkim is an example of authenticity, integrity and peace for India.”

“There are so many things we can showcase to the world. Sikkim has grown to be known as one of the most environmentally beautiful places in India and the world. We should appreciate this and preserve this great glory of this great culture and every opportunity and not to hesitate to share with the world,” he said.

AR Rahman expressed pleasure at being anointed the brand ambassador of the state of Sikkim. He appreciated the pristine beauty of Sikkim, the noble initiatives of the state in diverse fields, and the warmth and hospitality of the people of Sikkim. 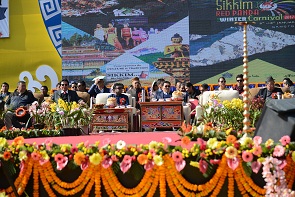 The much-anticipated annual event organized by the state tourism and civil aviation department took a giant leap from preceding years with the presence of music maestro AR Rahman. The addition of host of other events will surely enthrall tourists and locals for the next ten days.

He stated that the Carnival heralds the beginning of the year and reminds us of the immense work that is to be achieved through the year.

He illustrated the unique initiatives taken by the government especially with respect to the preservation of the environment. He made a clarion call to maintain the beauty of the state as a haven for tourism. He lauded the effort of the people of Sikkim to sustain the clean image of Sikkim. In his address, the chief minister touched upon various aspects of development achieved by the state and those on the pipeline.

After the official inauguration of the Carnival by the chief minister, the audience was treated to colourful cultural performances by artists from different communities of Sikkim and band performances by Sikkim Police Band and Sadam Secondary School Band. The Martial Arts demonstration also left the spectators spellbound as much as the performance by a mass congregation of 100 guitarists.