Sikkim Chief Minister Pawan Chamling on Tuesday informed that the 17th Karmapa Ogyen Trinley Dorji would be visiting the State during later part of this year.

Chamling on Tuesday read out a letter from the 17th Karmapa before a gathering for the Zandokpalri temple door installation ceremony at Denzong Mindrolling monastery, Tumlong in North Sikkim.

In a letter dated February 25, the 17th Karmapa addressed to the Sikkim Chief Minister expressed his desire to visit Sikkim later this year.

He was replying to a letter dated February 2 from the Sikkim Chief Minister on the invitation to visit Sikkim in March.

Citing his present health reasons and teaching commitments made to dharma centres in the US, the 17th Karmapa regretted his inability to visit Sikkim in March. 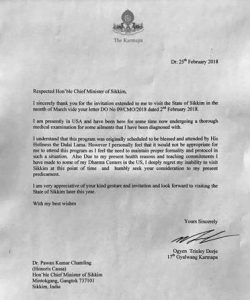 “I am very appreciative of your kind gesture and invitation and look forward to visiting the State of Sikkim later this year,” wrote the Karmapa in his letter to Chamling.

Chamling also disclosed that the Sikkim Government has submitted 35 memorandums to the Centre seeking permission for the 17th Karmapa visit to Sikkim.

“I have been to the national capital numerous times with the petition seeking permission for Karmapa’s visit. Several delegations of MLAs, ministers and MPs also went with the same pea,” the Sikkim Chief Minister said.

He further reiterated that he does not mix politics and religion.

“I will not take political advantage when Karmapa visits Sikkim. We will only take his blessings,” Chamling said adding the Centre must facilitate the visit.

Doctors should not join government service if they can’t protect themselves, says Tripura doctors’ body