Sikkim: Journalists feted for dedication and excellence in media field 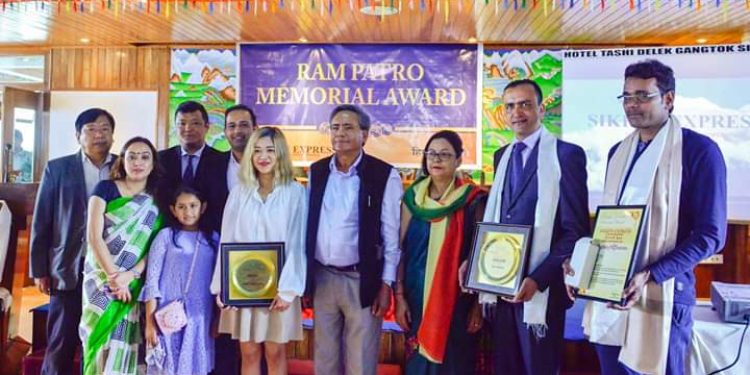 Sikkim’s digital media journalist Ajay Agarwal has been conferred with the ‘Ram Patro Memorial Award 2019 for Excellence in Journalism’ in Gangtok on Friday.

This award is constituted in memory of Late Ram Patro, who started Sikkim Express and Himali Bela, and the award has been presently annually to a journalist in recognition of their dedication and contributions through journalism.

Likewise, the award for the ‘Best working journalist in Sikkim Express and Himali Bela for 2018-19’ was presented to Sikkim Express staff reporter, Isabella Gurung. On the occasion, a staff of Sikkim Express, Ram Shakal Sharma was felicitated with the ‘Certificate of Appreciation’ for his dedicated service.

The awards were present by MP and former minister of Government of Nepal, Ram Karki and a senior journalist and editor-in-chief of a digital media, East Mojo, Karma Paljor.

In his address, the chief guest, Karki shared his memories of the connection with Himali Bela during his short stay in Sikkim during 1993.

Likewise, Paljor expressed his concern on the increasing challenges in journalism due to smart phones and social media platforms. He added that every person with smart phone has become journalist and broadcaster.

He mentioned that it was easy to become famous by doing journalism but the journalism in depth date was the need of the hour. He encouraged for in-depth data and research in the journalism. He asserted that journalists should check fake news to deliver sincere and responsible duty towards the society.