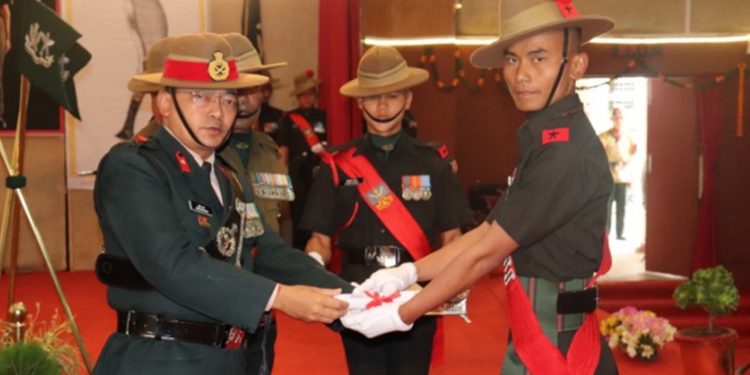 Altogether 185 newly-enrolled soldiers took oath on the occasion of attestation ceremony held at 58 Gorkha Training Centre in Shillong on Friday.

The 185 newly-enrolled soldiers, who graduated with unfaltering determination to serve the country, took oath to take on the supreme responsibility of serving and protecting the motherland.

The attestation ceremony was conducted at Soltee Hall of the 58 Gorkha Training Centre which was reviewed by Commandant 58 GTC, Brigadier Mukesh Gurung.

In his address, the Commandant congratulated the young soldiers of the Indian Army on their successful completion of their rigorous training in the Centre.

Stressing the importance of valour, traditions and ethos of the Indian Army, he congratulated the proud parents and guardians on successful graduation and induction of their sons into the Indian military service.

On the occasion, recruit Santosh Pariyar was awarded the ‘Overall Best Recruit’ and he was presented with the ‘Manekshaw Khukri’.

Parents of the young soldiers were also honoured with the ‘Gaurav Padak’ in recognition of their role and contribution to the nation.