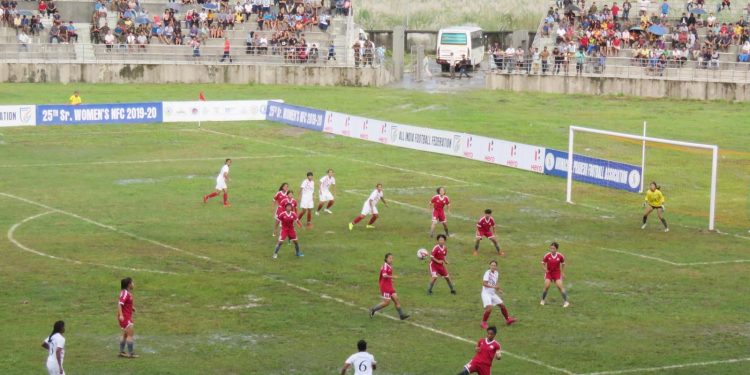 View of a match of the 25th Senior National Women’s National Football Championship on the inaugural day at Pasighat. Image credit - Northeast Now

However, another women’s football team from the Northeast, Mizoram lost to Railways 0-4 on the inaugural day of the event.

In the two other matches played on Tuesday, Haryana defeated Madhya Pradesh 1-0 while Bihar outsmarted Karnataka 3-0.

Railways’ forward Yumnam Kamala Devi kicked one goal during the first half of the match while she added three other goals during the second half.

Defending Mizoram team despite having a number of opportunities could not return any goal till the end.

The national event was kicked-off at Pasighat indoor stadium in Arunachal Pradesh in presence of Arunachal Chief Minister Pema Khandu and Union Minister of State for Sports Affairs Kiren Rijiju.

The inaugural function was also attended by Arunachal Pradesh Sports Minister Mama Natung and Speaker PD Sona along with a host of ministers and MLAs.

Union Minister Rjiju in his address said, “Arunachali youths have sufficient sports talents which they should exercise in proper platform.”

Rijiju also said, “Arunachal government is taking steps to create sports talents for sending them to Olympic Games with next five years.”

Chief Minister Khandu while speaking on the occasion said, “The State is proud of holding such a national event.”

Eight teams including Assam, Andhra Pradesh, Hyryana, Madhya Pradesh, Bihar and Karnataka locked the horn with their respective defendants on the opening day.

The games fixed for Wednesday are: Tamil Nadu vs Chhattisgarh, Goa vs Uttar Pradesh, Himachal Pradesh vs Delhi, Odisha vs Pondicherry and Kerala vs Chandigarh.

The host Arunachal team will lock horn with Telangana on September 12.

The championship has been organized by the All India Football Federation in association with the Arunachal Pradesh Football Association.

East Siang district administration of Arunachal has made elaborate arrangements for lodging, boarding and refreshment of the players and their associates.

It has mobilized the volunteers to oversee the safety measures while power department and PHED have been asked to ensure uninterrupted supply of power and water for the teams and guests.

Altogether 30 teams of women players from across India are participating in the 15-day event.

The participating teams have been divided into eight different groups.