Following Tuesday’s suspected militant attack at Jagun on the Namphai-Namchik Road along the Assam-Arunachal Pradesh border in which a total of 9 oil tankers, loaded with crude oil, were torched by suspected militants, the security lapse has blamed for the incident. 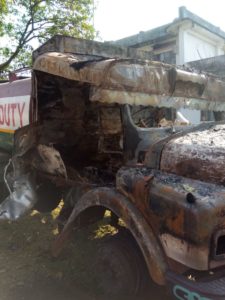 According to reports, the crude was being transported from the oil well site which is operated jointly by Oil India Limited and GeoEnpro Petroleum based at Kharsang in Arunachal Pradesh.

Oil India sources said, “The Oil India Limited has been bearing several lakhs annually in the name of security. Those security personnel also include armed cops from Assam Police.”

Sources also informed that security personnel are deputed to ensure security of the tankers, OIL staff members on duty and property on the way from Jagun to Kharsang oil production area in Kharsang oilfield and vice versa. “The expenditure in the name of escorting vehicles for the armed security personnel is also borne separately by OIL after similar incidents of violence took place earlier in the same insurgency-infected belt in 2007 wherein the driver of a tanker was killed in miscreants’ attack besides oil tankers were torched,” sources said, adding, “What the police find in its investigation to this effect has been awaited for further official movements.”

Admitting that the incident on Tuesday happened due to security lapses, OIL sources said that the  highly-inflammable crude oil in the oil tankers were safe.

Meanwhile, security sources informed that a counter-insurgency operation has been intensified across the Assam-Arunachal border stretching between Changlang and Tinsukia district.

On the other hand, the vehicle staff members, drivers and contractors spitting their wrath upon the fragile and inadequate security covers have urged the administration to provide full-proof security and otherwise, they have threatened to cease work.