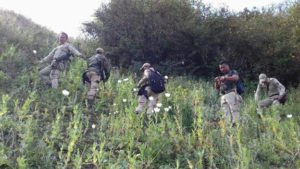 The action was taken up since Friday by the police against poppy plantation and continued till date.

Meanwhile per reports from the Kakching district police, two individuals one with 30 grams of contraband heroin number 4 and another with 110 numbers of world is yours (WY) tablets were arrested from Sora village in Kakching district on Friday. The two individuals were identified as Wasim Khan(21) of Sora Karam Consumer awang Leikai and Md Asgar Khan (34) of Sora maning Leikai, sources said, the market value of the seized drugs are estimated to be around Rs 3.71 lakhs.