The Indian Journalists Union (IJU) has condemned the ‘high handedness’ of the Meghalaya Police to ‘browbeat’ Northeast Now to remove a news item and disclose its sources.

A release issued on Friday also stated that ‘the police has asserted that media houses had no journalistic privilege or any codification which prevents them from disclosing their sources’.

The release further stated that the issue has led to apprehension among the State’s media fraternity wherein they fear police reprisal and misuse of power.

The row started with Northeast Now carrying a news item that former Meghalaya chief minister and presently leader of the opposition in the Assembly, Dr Mukul Sangma may join the BJP.

Notably, Northeast Now was served a notice under Section 91 CrPc by special SP MGT Sangma directing it to remove the news item and also asked to provide the authenticity of the sources. 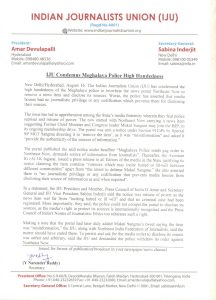 In the statement, the IJU president and member of Press council of India D Amar and secretary general and IFJ presindet Sabina Inderjit said the notice was a ‘misuse of power’ as the news item was far from ‘inciting hatred or ill will’.

Moreover, the statement further stated that no criminal case had been registered.

While urging all parties to end the matter, the IJU along with Northeast India Federation of Journalists said to persist and ask for the media to disclose its source was unfair and arbitrary.

The IJU has also urged the Meghalaya Police to withdraw its order against Northeast Now.