The Rashtriya Swayamsevak Sangh(RSS) is going to hold a  lecture programme on ‘Saluting Freedom Fighters from Northeast’ as an ode to the brave freedom fighters of the region in New Delhi on August 12.

Eminent social activist Chandra Kumar Bose has been invited as the chief guest of the programme. 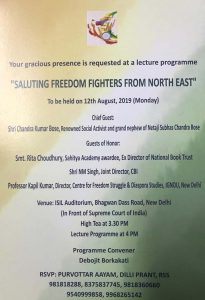 Central Bureau of Investigation (CBI) joint director N.M. Singh and Professor Kapil Kumar of IGNOU’s Centre for Freedom Struggle and Diaspora Studies have also been invited as the guests of honour of the programme.

The programme will be held to pay tribute to the unsung heroes of the northeastern region, who played a great role to free the country from the British rule.

It will also give a detailed account of the life and the hardships of the freedom fighters of the Northeast.

The programme will be held from 4 pm at the Indian Society of International Law (ISIL) Auditorium in New Delhi.