Re-poll in many booths in Tripura West seat likely 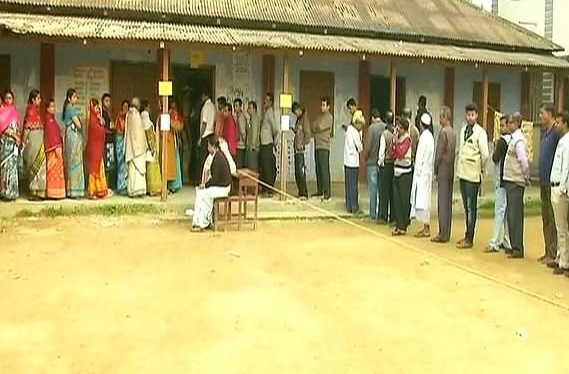 Voters queue up at a polling station in Tripura.

The Election Commission (EC) is likely to announce re-polling in a large number of polling stations in the Tripura West Lok Sabha constituency, where voting took place in the first phase of elections on April 11.

“After scrutiny of reports, documents, video and webcasting footages of the poll process in the Tripura West Lok Sabha seat, detailed reports were sent to the Election Commission on Friday. The commission after studying the reports may declare re-poll in a large number of polling booths,” a senior EC official said.

The official said Tripura CEO Sriram Taranikanti on April 18 apprised the EC on the wrongdoing and submitted detailed reports and recommendations.

Taranikanti said after scrutinising reports, it was found that 83.15 per cent of the 1,257,944 voters cast their voters in the deferred polling on April 23 in the Tripura East parliamentary constituency, reserved for the tribals. “There is no major complain in the polling to this seat,” he said.