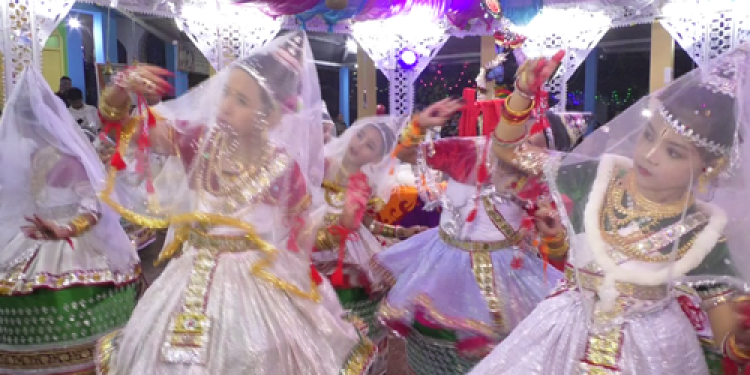 Hundreds of Hindu Manipuris’ celebrated “Maha Raas”, a festival celebrating the love life of Lord Krishna, here from the midnight of Friday.

The festival is celebrated every year on the full moon night of ‘Kartik Purnima’ in the Hindu month – ‘Kartik’ to mark Krishna’s love for Radha.

Girls in their traditional dresses danced round the idols of Lord Krishna and Radha even as one acting as ‘Gopies’ sang devotional songs throughout the night at a local temple.

The Maha Raas celebration started in Tripura at the Radha-Madhav Jews Temple long ago.

Earlier before the partition of India devotees far from Syllhet and Comilla in present Bangladesh use to come to participate in the night long festival.

The celebration started after a Maharani of the Manikya dynasty of Tripura, daughter of Manipur’s Maharaja Bhagya Chandra brought the idol of Radha-Gobind from there and established a Radhamadhav temple here.

Tripura had a cultural and traditional bond with the Manipur kingdom that started more than 350 years back through matrimonial alliances.

In fact during the reign of Maharaja Krishina Chandra Manikya in the late 18th century along with the Manipuri culture, Bhakti cult was also in progress in Tripura.

Today the festival is sponsored by the state government as per the treaty between the Manikya dynasty and Union government during the time of the merger of Tripura with the Indian union.

This is the 220th year of celebration of Rass. A festival of particularly the Hindu Manipuri’s but today both Bengalis and even the tribal population of the state participate in the nightlong celebration and it is a platform of communal harmony.

Abhijeet Bhattacharjee a priest in the temple said that the Rass Leela of Tripura state in the 1798 AD during the rule of second Rajdhar Manika after Hariswari, the second daughter of Manipur’s Bhagya Chandra, was married here. From that time the Rass Leela has continued in this Radhanaga temple. People from Manipuri community along with other communities take part in it.

In 1798 Maharaja Bhagya Chandra along with her daughter Hariswari during their pilgrimage to Nabadwip brought this image of Radha Krishna. Later the daughter was married to the 2nd Rajdhar Manikya and then she brought the images and started worshiping it. From then the Rass festival started, initially, it was worshiped within the premises of the palace but later the temple was established.

The Radha Govindas Rass dance is a classical form of dance and symbolizes the rich history and tradition of the Manipuri community. It was Nobel laureate Rabindranath Tagore who adopted the dance form the palace here to Santiniketan.