Protest in Agartala over vandalizing of bust of Vidyasagar in Kolkata 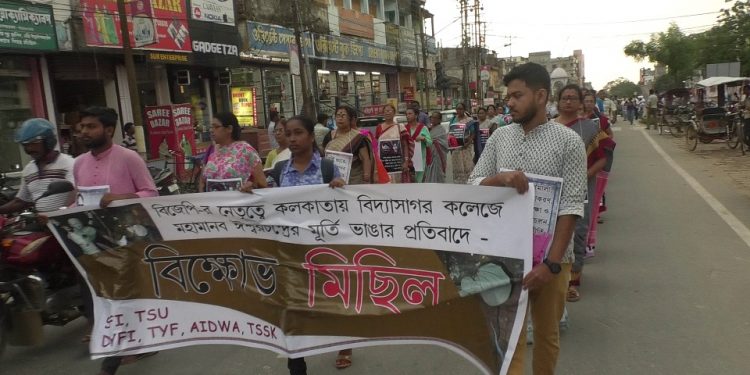 Various Leftist students and youth organizations took to the streets in Tripura’s capital Agartala on Friday to protest against the vandalizing of the bust of Pandit Ishwar Chandra Vidyasagar in pitched battles between the BJP and TMC students wing workers in Kolkata two days ago.

Hundreds of protesters from SFI, TSU, DYFI, TYF, AIDWA, TSSK wearing placards of the picture of Pandit Ishwar Chandra Vidyasagar went through the streets in Agartala denouncing the incident considered one of the most unfortunate attacks on the soul of West Bengal.

“Vidyasagar is the symbol of Bengal’s Renaissance and so vandalizing of his statue is an attack on our culture, heritage and progressive ideas. Here people from all walks of life are taking part in this protest procession against the vandalism of the dark forces,” said CPI-M state general secretary and spokesperson Das.

Another protester Dr Salim Shah, a university teacher said, “Not only Vidyasagar, it has become a common culture of the present day politics in India. In Tripura, we have seen the demolition of the statue of Lenin’s, Sukanta, and also noticed the demolition of Ambedkar’s statue. Everywhere this culture has grown up and it is not in the favor of Indian culture, unity, and diversity. For the last four-five years what we are noticing is really very bad what is happening all over the country.”

As allegation and counter-allegation continue over the vandalizing the bust of Pandit Ishwar Chandra Vidyasagar, one of the pioneers of the Bengal Renaissance Movement, the TMC and BJP alleged each other for the incident.