The Tata Institute of Social Sciences (TISS), Guwahati Campus students, who launched an indefinite hunger strike on Monday, were forced to shift their protest venue from the bank of Dighalipukhuri to campus premises by police citing Gauhati High Court order.

The Gauhati High Court on September 18 last year directed the Kmarup (M) district administration not to allow holding of rallies, dharnas, protest, and meetings etc. on the Southern end of the Dighalipukhuri.

As many as 43 students of TISS, Guwahati campus launched the hunger strike from Monday as the authorities have not agreed to waive fees for SC, ST and OBC students from poor economic backgrounds.

The students of Guwahati campus along with peers from TISS Mumbai, Hyderabad and Tujlapur, have been on a lock down since February 21, to protest against the administration’s decision to withdraw financial support to SC, ST and OBC students. 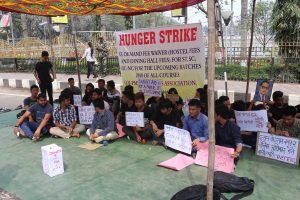 Speaking to Northeast Now, Kabithui Rongmei, president, Government of India-Post Matric Scholarships (GOI-PMS) Students’ Association said, “43 students were carrying out a peaceful hunger strike but police came and asked us to vacate the place. They said that we don’t possess necessary permission. They also manhandled two of our fellow students. We had submitted an application to the Deputy Commissioner, Kamrup (Metro)’s office and got approval from them. At that time, nobody told us that we are not allowed to protest here.”

Police, however, refuted the allegations that the students were manhandled.

“There was no manhandling. The students were not aware of the fact that protests are not allowed in Dighalipukhuri. When we made them aware about it, they went back,” Labanya Talukdar, OC, Panbazar PS told Northeast Now.