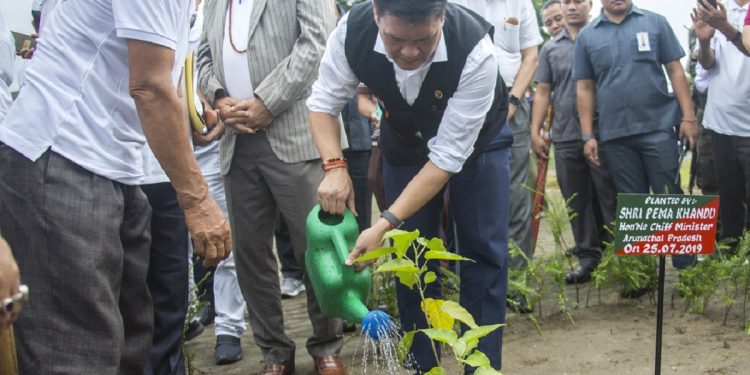 The campaign is part of the Van Mahotsav celebration with a target of planting one crore saplings within the next five years.

Speaking on the occasion at the Art of Living campus at Jollang, the chief minister said the drive is being carried out across the State by the State Forest Department for achieving the target and called for celebrating the day.

Khandu said Arunachal Pradesh is known globally for its large forest cover and is considered one of the 18 bio-diversity hotspots in the world.

He said the forest carbon stock in Arunachal comes to 148.52 tonnes per hactre, the highest in the country and whose value in terms of carbon credit at six Euros per tonne works out to Rs 48,000 crore annually.

Highlighting the relevance of forest in tribal societies, the chief minister said both are interconnected and culturally bonded where dependence on forest is vital for tribal people for their everyday needs.

He called upon the Forest Department to come up with a vision to preserve this intricate link and to enable the tribal people to reap economic benefits from the forest in a sustainable way.

Khandu also called for giving forethought to such agendas, which in the name of protecting Mother Earth only aim to block the development vital for the well-being of the State.

He said such misplaced agendas are not in the interest of the State and called upon the young minds to analyse for themselves.

Deputy chief minister Chowna Mein said that the State Government under Khandu accords priority to conservation of forests and biodiversity.

“Despite the State having 82 per cent forest cover, the government launched the campaign so that this plantation drive helps create awareness about the value of greenery in the forest, protect the environment and combat climate change,” he said.

There is a huge scope for developing forest tourism in the State which in turn can help promote sustainable forestry management and support local communities, Mein said.

“Planting trees is one of the most important things you can do to save the environment,” he told the students present on the occasion and encouraged them to generate awareness on how to safeguard nature for future generations.

Mein commended the Department of Environment & Forest for launching and making the students’ a part of the Clean-Green Arunachal Campaign, 2019.

“We believe students are the future. Instilling in them good habits can help secure a future for generations to come,” he said.

All dignitaries and school children present later carried out a ceremonial plantation drive. Meanwhile, plantation drives were also held at several other districts of the State.

In tune with the Clean-Green Arunachal Campaign, the Lohit forest division in association with the district administration organized a mass tree plantation drive at Digaru and successfully planted over 7000 tree saplings.

Similar drives were also organized at Aalo and Likabali.