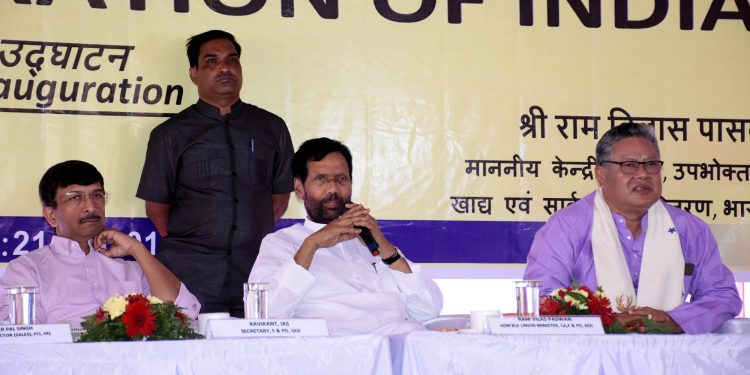 During his visit, Paswan reviewed the Food Corporation of India (FCI) operations, Public Distribution System computerization, procurement and other related matters of north-eastern states during his two day visit to Manipur.

The union minister informed he had discussed in detail the National Food Security Act issues, drought related problems and other related matters with the general managers, executive directors and secretaries of the north-eastern states.

He was present during the inauguration of a food storage depot having a storage capacity of 4600 metric tones at Old Cachar Road in Manipur’s Bishnupur on Saturday.

The foundation stone of the food storage depot was laid by Paswan in 2015.

The visiting union minister also thanked the FCI officials for their work and team effort in a move to upgrade the existing FCI office in Imphal into a full-fledged regional office by January next year.

Informing that two FCI godowns have been inaugurated by the Prime Minister, he said that the Government will further try to open FCI godowns in almost all the districts of the north-eastern states according to the availability of the land.

Paswan also mentioned post machines have been implemented in 14 states of the country in connection with the one nation one card scheme.

He also said the people of Manipur should try to get the benefits of Prime Minister’s Ayushman Yojana that gives Rs five lakhs financial assistance per family in a year.

Executive Director Anurag announced that construction of new godown at Churachandpur is in the pipeline and also mentioned that additional food grains are available under the open sales scheme in times of drought.

FCI has implemented depot online system in most of its owned depots in the North East Zone.

The union minister who arrived in Imphal on Saturday on a maiden two-day visit after becoming union minister for food and public distributions, had also requested all the states for their active participation in creation of new storage capacities by identifying/offering suitable lands for construction of go-downs so that the production and PDS operations go smoothly in the north-eastern states.