The Assam CM tweeted, Deeply saddened by the untimely demise of legendary Bollywood actor #Sridevi. My heartfelt condolences to her family and countless fans. Her enormous contributions to the Indian cinema industry will be remembered forever.

Himanta Biswa Sarma tweeted, It is sad to hear of demise of #Sridevi, an extremely versatile actor who dominated Indian cinema for decades. My prayers are with the family and her millions of fans. 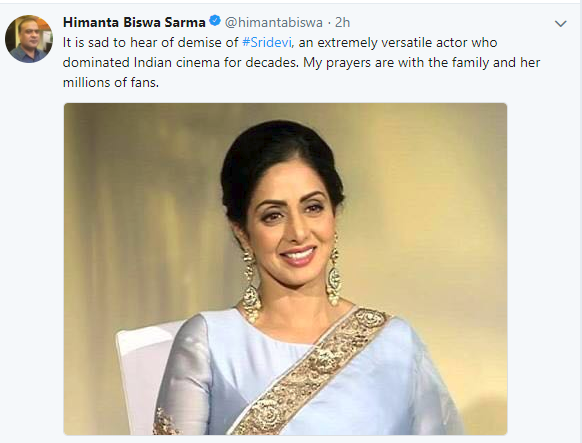 Teary eyed actor Adil Hussain while talking to media, said, I really have no words. I still find Sridevi’s death unbelievable and undigestible. I am still not being able to comprehend this loss.

Noted actor Adil Hussain starred with Sridevi in her comeback movie English Vinglish, which was warmly received by the audiences.

Actress and Assam tourism ambassador Priyanka Chopra tweeted, I have no words. Condolences to everyone who loved #Sridevi . A dark day . RIP

Model and actor Dipannita Sharma from Assam tweeted, Wait … what? Is this even true ? One of my favourite on screen divas gone so soon ? #sridevi I looked up to you & when I met you once I told you that. You were grace,beauty & talent personified . I can’t believe this … gone too soon. What can I say. Loss for words.R.I.P

Actor and Arunachal Pradesh tourism ambassador, Co-owner of Northeast United FC John Abraham tweeted, Completely heartbroken with the loss. She went too early. We will miss her.

Chief Minister of Meghalaya, Mukul Sangma tweeted, Saddened to hear about the unfortunate demise of screen icon Sridevi. My condolences to her close ones. May her soul rest in eternal peace.

Condolence messages from all quarters poured in after the news of actress Sridevi’s demise came out. The veteran actress married film producer Boney Kapoor with whom she had two daughters. She was in Dubai to attend nephew Mohit Marwah’s wedding. She had a cardiac arrest. She was 55.