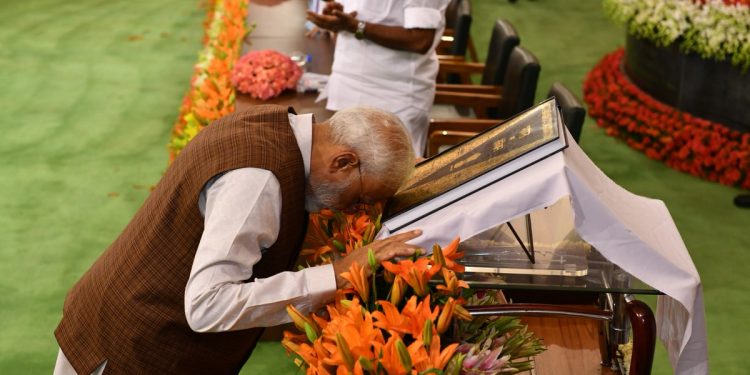 Prime Minister designate Narendra Modi bows before the Constitution of India before addressing the newly-elected Lok Sabha members of the BJP and its allies at the Central Hall of the Parliament on May 25, 2019. Image courtesy: Twitter @narendramodi

Prime Minister designate Narendra Modi on Saturday sought to allay the fears of the minorities by asking the newly-elected MPs of the BJP and its NDA allies to gain the trust of the minorities.

This came immediately after the entire Northeast, consisting largely of minority and tribal communities, were cocooned in the grip of a fear psychosis after BJP’s landslide victory in the Lok Sabha elections.

While addressing the newly-elected Lok Sabha members of the BJP and its allies at the Central Hall of the Parliament, Modi emphasized that everyone would have to be taken along for the country’s progress.

To drive home his point, Modi who is set to be elected as the Prime Minister for the second consecutive term cited the example of the first war of Independence in 1857 when members of all communities worked ‘shoulder-to-shoulder’ to get freedom from the British rule.

Modi came down heavily on the opposition with clear hint on the Congress, accusing the grand old party of keeping the minorities confused and frightened and merely using them as vote bank.

He said that the minorities were not provided with proper education and health care facilities earlier.

“We have to breach the illusion of fear and insecurity,” he added.

Insisting that his government would be working for 130 crore people of the country without discriminating against anyone, Modi underlined the need for winning the trust and confidence of the minorities.

He said that those who have not voted for the BJP and its allies are also ‘a part of us’.

The Prime Minister further said it would have been better for the nation had the minorities been given equal role in the economic and social development earlier.