At least 15000 tonnes of beetle nut is produced every year and sold in Assam, New Delhi, Meghalaya, Chennai, Bangalore 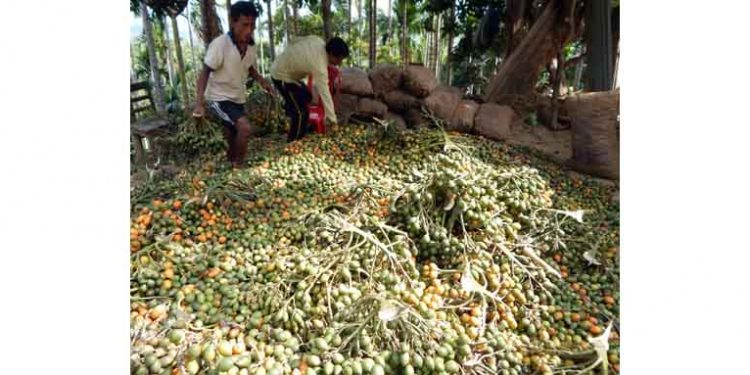 Zoitang ADC village located 15km away from the Dharmanagar subdivision in the North district of Tripura is dependent on agricultural products for their livelihood.

The village set up in the year 1968 is engaged in the production of these fruits and vegetables since the beginning. All together there are 1700 families who belong to Ranglong (Halam) community and practice Christianity.

Since a long time they have been cultivating these vegetables, fruits and selling them outside the state. But due to the lack of Government support they are unable to develop their business.

Among all the agriculture products they sell outside the state, Beetle nut is their forte and November and December is the peak time for production as well as the selling.

At least 15000 tonnes of beetle nut is produced every year and sold in Assam, New Delhi, Meghalaya, Chennai, Bangalore.

The women laborer who collects the beetle nuts gets Rs 250 and stated they can’t ask for hike from the owners as the profit is very less.

Few buyers who buy Beetle nut from this village are Jammal Ud-Din, Dilwar Hussein, Hellal Ud-din and others.

Pabanroy Halam a resident of this village has 50 kani where he does agriculture.  On the other hand they don’t know what kind of tax they are paying at the check post.