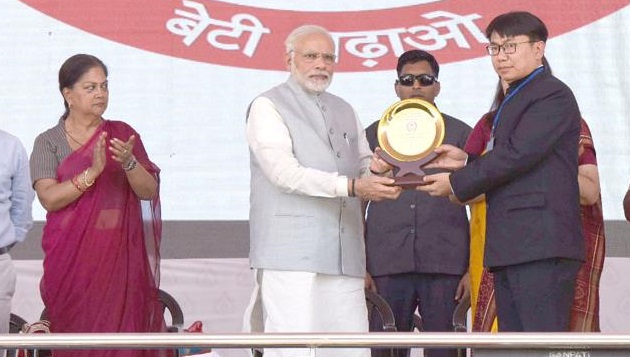 The North district of Sikkim has found its place among the ten best districts of the country for outstanding contribution to effective community engagement of the Centre’s flagship scheme ‘Beti Bachao, Beti Padhao’.

The Prime Minister Narendra Modi awarded North Sikkim along with other nine districts under the scheme during a programme at Jhunjhunu in Rajasthan on Thursday.

The award was received by North district collector Karma R Bonpo from the Prime Minister, according to an official press statement.

The ‘Beti Bachao Beti Padhao’ scheme is being implemented in North Sikkim since the past three years and various community engagements have been undertaken in the district under the programme.

The district has made significant progress in the areas like sensitization of women and child issues, education of the girl child and improvement in basic parameter like child sex ratio, immunization and first semester antenatal care (ANC) registration.

The Deputy Commissioner of North Sikkim Karma R Bonpo stated that the district was selected for its performance due to the ‘enabling environment’ for women created in the State.

He said that under Chief Minister Pawan Chamling’s leadership, women have been given their due rights and status in the society.

Due to the efforts of the State Government, women of the State are taking a leading role in all walks of life, added Bonpo.

The Deputy Commissioner also lauded the contribution of the officers responsible for implementation of the programme.