Nitin Gadkari being blamed for high-flood in Assam, especially in Kaziranga National Park 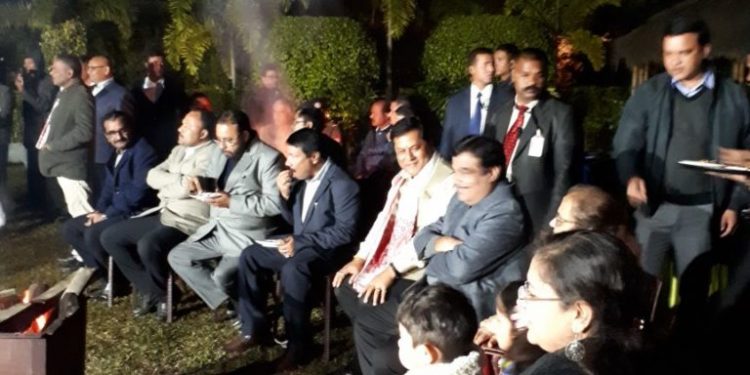 Amid COVID19 pandemic, Assam is caught in the whirlpool of a high-flood, and 44 people lost lives in the deluge.

More than 1.3 million people of Assam marooned in high-floods, have now started to blame union minister of water resources Nitin Gadkari for “doing nothing” to mitigate the problem of flood in the state.

“This is one of the worst floods in Assam in last two decades,” Ramesh Das, a resident of Bohikhowa near Agratoli range of Kaziranga National Park, said.

Das said, in addition to Bohikhowa, the nearby village of Kandulimari, which is located at the eastern fringe of Kaziranga have also been affected by the high flood.

“The wild animals in Kaziranga National Park are also running helter-skelter, and are getting drowned,” Ramen Phukan, a resident of Kandulimari village, said.

Many villages near the Central Range of Kaziranga National Park, including Japoripathar, Basagaon and Dahgaon, are also badly affected by the high-flood.

The villagers near Kaziranga National Park have started blaming Nitin Gadkari for the trouble they are now facing because of the high flood.

The villagers came to know that huge fund earmarked for mitigating floods in Assam was diverted to “charter aircraft” and pay for food and suites in a luxury resort in Kaziranga National Park for an extended family holiday for Nitin Gadkari.

“How can you expect the government do anything concrete when the union water resources minister visits Assam only for holiday?” another villager, said.

The Brahmaputra Board, in an RTI reply, had informed that it had paid Rs 31,48,326 to charter an aircraft for four days from December 29, 2017 for the visit of Nitin Gadkari and his family members from New Delhi to Jorhat.

The aircraft flew back the VVIP guests to New Delhi on January 1, 2018.

While the total cost to charter the aircraft for four days was Rs 62, 96,652, the Brahmaputra Board shouldered 50 per cent of the expenditure, the remaining amount of Rs 31,48,326 was paid by the National Highway Infrastructure Development Corporation.

The Brahmaputra Board had also paid for food and the rooms in the luxury resort where Nitin Gadkari and all his family members had stayed in Kaziranga National Park.

Gadkari flew from New Delhi in the chartered flight at 7 am on December 29, 2017, and landed in Jorhat at 10 am, and flew to Majuli, the largest river island of the world in a chartered helicopter, the Brahmaputra Board informed.

In Majuli, the union minister laid foundations for the Brahmaputra Board complex, protection of Majuli from flood and erosion and flagged off regular cargo service from Pandu to Dhubri.

Despite falling sick during the foundation stone laying ceremonies in Majuli, Gadkari flew to Kaziranga National Park in the chartered helicopter and checked into a luxury resort along with his family members.

After reviewing the national highway projects of Northeast states on January 29, the union water resources minister and his family members enjoyed colourful cultural programmes at the resort along with senior Assam ministers.

After elephant and jeep safaris in the Kaziranga National Park, Gadkari on December 30, 2017, spent only one hour for work. Between 11 am to 12 noon he had attended the 9th meeting of the High-Powered Review Board of the Brahmaputra Board.

As December 31 was a Sunday, the Gadkari family had continued to be in total holiday mood. And after celebrating the New Year eve in the luxury resort, the family flew back to New Delhi at 8 am on January 1, 2018 on public money.

While poor people in Assam face the wrath of floods every year, it is shocking as to why the Brahmaputra Board paid for food and stay and to charter an aircraft for Gadkari and his family members.

As per the mandate, the Brahmaputra Board is supposed to carry out survey and investigations in Brahmaputra Valley and to prepare master plan for the control of floods, bank erosion and improvement of drainage.

Interestingly, there has been no progress with the projects for which foundation stones were laid by Nitin Gadkari in Majuli. Construction for the Brahmaputra Board complex in Majuli is yet to begin.

Similarly, the TK Engineering Consortium Private Limited, which was awarded with the Rs 180 crore anti-erosion projects in Majuli, did not do much work. The Arunachal Pradesh-based company is still not showing any sincerity to complete the project before the arrival of the next monsoon.

Similarly, Nitin Gadkari’s tall claims to dredge the mighty Brahmaputra did not see any actions on ground. While flood control fund was diverted to charter aircrafts for Nitin Gadkari, the fear of flood during monsoon will continue to worry the poor people of Assam.

Meanwhile, flood situation in Assam worsened further on Monday with two more persons losing their lives in the deluge in Nagaon district, taking the death toll to 44 in the state.