Pro-Tem Speaker Ratan Chakraborty of Tripura Legislative Assembly on Thursday administered the oath of office and secrecy to newly elected members as legislators of 12th Tripura Assembly during an oath taking ceremony held at Assembly lawn in Agartala on Thursday. 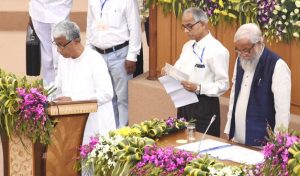 Opposition leader and former Chief Minister Manik Sarkar along with fifteen other MLAs of CPI (M) have also taken the oath as MLA of Tripura Legislative Assembly.

Deputy Chief Minister Jishnu Debbarma was not present at the oath taking ceremony, as he has been elected as MLA of Tripura Assembly only on Thursday after announcement of the election results for Charilam (ST reserved) Assembly constituency.