Tour to give insight to rich heritage of India 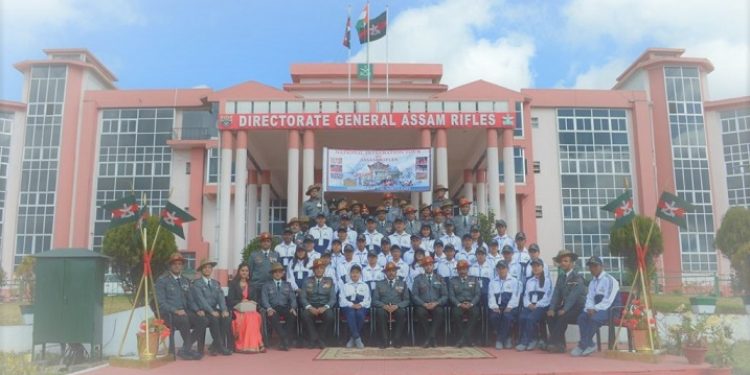 The group of 26 students and seven teachers from N-E states with DGAR at the flagging off ceremony in Shillong.

The group of students and teachers selected from of all the North Eastern states are being taken on a visit to Delhi and Agra under the aegis of Assam Rifles (AR). The students will be interacting with a large number of important dignitaries and personalities during the visit from December 1 to 11 besides visiting various places of interest in Delhi and Agra. Captain Karan of 46 Assam Rifles will be conducting the tour.

They will have the opportunity to meet the President of India, Union Minister of State (Home), Chief of Army Staff and cricketer Gautam Gambhir.

Assam Rifles have selected the group of students and teachers from far flung areas of Arunachal Pradesh, Assam, Manipur, Meghalaya, Mizoram, Nagaland and Tripura as part of its ongoing outreach programme to foster the spirit of national integration across the entire swathe of the North Eastern states.

The National Integration Tour is aimed at educating and motivating youth of North Eastern states by providing an insight to the rich heritage of the country as well as various developmental and industrial initiatives that are underway through visit to various historical monuments and other important landmarks in Delhi and Agra.

The participants of the tour representing all the North Eastern states will also get an opportunity to share and highlight respective cultures, aspirations and challenges with their counterparts from the other states.