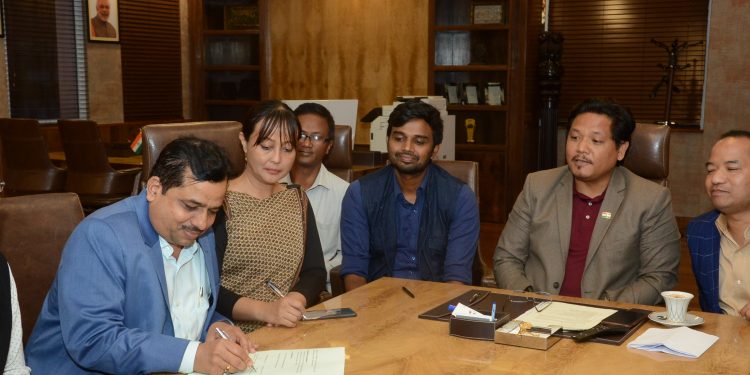 The MoU was signed between the Meghalaya’s sports and youth affairs department and HSCL.

An agreement for development of sports infrastructure for the National Games to be hosted by Meghalaya in 2022 was signed on Thursday.

The Memorandum of Understanding was signed between the Meghalaya’s sports and youth affairs department and Hindustan Steelworks Construction Limited (HSCL).

Meghalaya chief minister Conrad K Sangma, sports and youth affairs minister Banteidor Lyngdoh and other officials of the sports department were present when the pact was signed.

The MoU was signed in the office chamber of the chief minister.

Recently the chief minister had inspected a site at Dalmagre near Tura for construction of a multi-utility indoor stadium.

The stadium is part of the infrastructural development initiated by the state government for hosting the National Games.

CM Conrad had also inspected the site for building a games village and the main stadium at Umsawli on the outskirts of Shillong city for hosting the National Games.

On August 21, the chief minister along with health minister AL Hek met Union minister of state (Independent Charge) for sports and youth affairs Kiren Rijiju in New Delhi and apprised him about the state’s preparedness for hosting the National Games in 2022.

He sought special financial assistance for conducting the games, and gave a detailed presentation on infrastructure requirement.

Hek also submitted a separate memorandum to Rijiju with a request to provide special consideration to develop the Shillong Golf Course that would turn 100 years in 2024.

Rijiju had assured all support to the Meghalaya government.