Namghar looted at a prominent area in Guwahati 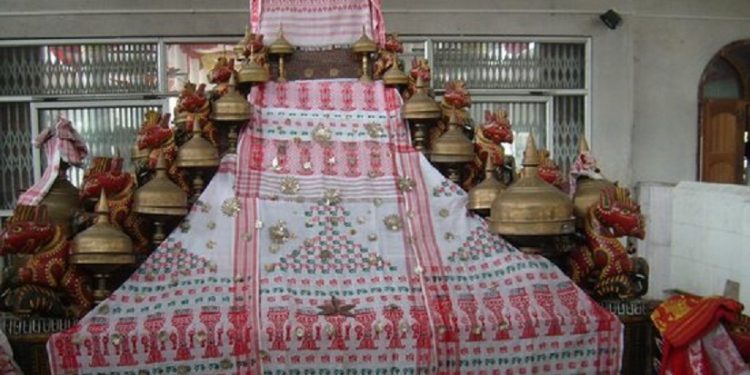 In yet another shocking and sacrilegious act, one Namghar in Uzanbazar, Guwahati was looted. Thieves, apparently, took advantage of heavy rains in the city caused by cyclone Fani and continuous power cuts and broke into the temple before decamping with valuables, reports The Sentinel.

The incident is reported to have happened in the wee hours of Saturday-Sunday in Borkhelia Sarbojanin Mahapurushiya Dihingia Namghar at Sati Radhika Shanti Road in the Uzan Bazar area in Guwahati.

The theft came to light by a lady cleaning the Namghar noticed the lock of the main gate to the temple had been broken and a two iron rings holding the lock was broken too.

The Namghar is situated barely 500 metres away from Latasil police station.

Amongst goods stolen from the Namghar are two gold flowers, many silver flowers and two golden chains. The donation box of the temple was also found missing from which amount worth a few thousand was stolen.

The police said that an FIR has been lodged and a case has been registered and an investigation has started into the incident of theft.

Police have, however, also mentioned that they are yet to receive the whole list of the stolen items from the complainant and that more items are still being added to the list.

The police also noted that the Namghar has no CCTV cameras installed but Sati Radhika Shanti Road where the temple is situated has two CCTV cameras and police will investigate the footage of these cameras. No arrests have been made so far.

The incident brings to memory the theft of the ancient Ugratara temple idol which occurred about 6 months ago.

Residents of the Sati Radhika Shanti Road of Uzanbazar have expressed concern at the thieves’ audacity to break in to a religious place. The residents have also mentioned that there no night patrolling is carried out in that area.