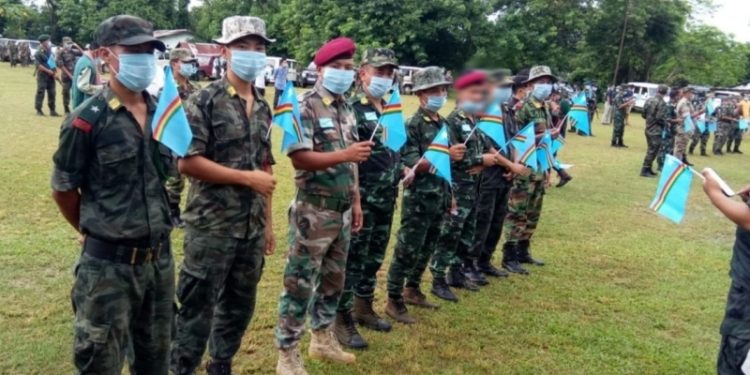 The NSCN (I-M) on Tuesday expressed dismay that some of the respectable Naga organisations “cheated” themselves and the Naga nation as they treacherously ignored the historical and political significance of defending the Naga flag and constitution.

“For the past more than 70 years we have gone through blood, sweats and tears fighting under the banner of Naga flag. Our constitution (Yehzabo) guides us who we are and how we function as distinct people who will go to any extent to defend our lands,” convener, steering committee, NSCN, “Maj” (retd) Hutovi Chishi said in a statement titled “We shall take our stand”.                           .

The outfit made it clear that it will never sign any agreement that affects the freedom of “our future generations”.

“We will not betray our God who gave us the right and conscience to live as a free nation,” it said.

The NSCN said it has gone through two ceasefire agreements with the government of India and that the second-Indo-Naga ceasefire is still in operation that is taking the Indo-Naga political talks to the crucial stage.

At the international level, the Nagalim is not alone and the Unrepresented Nations and Peoples Organisation leadership stoutly stood behind the NSCN, the statement said.

The NSCN appreciated the fellow Nagas who stood firmly behind Indo-Naga political issue. It underscored the need to sail together leaving behind petty divisive politics as prodded by certain forces. “Let us keep in mind that if we mishandle the ongoing Indo-Naga issue we shall be answerable to the future generations because the Naga issue will never die at the hands of any force on earth,” it said.

The statement said it is unfortunate to have many black sheep in the garb of Naga national freedom fighters who have nothing good to show but devalue the political sanctity of the Naga issue.

“They are no better than parasites whose main purpose is to survive at the cost of others who are doing the donkey’s job to carry the national load. Posterity will judge them for contaminating the Naga issue,” it said.

In another attack on interlocutor RN Ravi, also the Nagaland Governor, the NSCN said the “vile attempt” made by him to pull the clock back of the over 70 years of Naga issue ever since the Naga independence was declared on August 14, 1947, and 23 years after the second Indo-Naga ceasefire and political talks will go down into the Indo-Naga history.

“Despite such naked exposure of Ravi’s deceitful agenda, a few selfish Nagas allowed themselves to be carried away by his scheming tricks to destroy the Naga political issue by desperately trying to force it into law and order problem,” the statement said.

It said the NSCN will take the stand to defend Naga political issue at all cost.

Noting that the Nagas are passing through the most decisive moment, the statement said, “We have to choose which way to go; either to allow ourselves to be carried away by the wave of anti-Naga forces in collusion with Ravi-led forces or choose to stay active defending the historical and political rights of the Naga people.”

The decision is crucial as the enemies are at work sleeplessly, it said.

The NSCN said any organisation or individuals who are falling in line with Ravi are to be classified as anti-Nagas. The Naga people will not forgive those who are trying to kill the rights of the Naga people by supporting “India’s suppressive policy”, it said.

The statement said great leaders like Khodao Yanthan, “Gen” (retd) Kholi Konyak and Isak Chishi Swu died without seeing the fruition of “our long struggle”. “We have to honour them as we intensify our struggle under the collective leadership of Q. Tuccu, Tongmeth Wangnao and Th. Muivah,” it added.