After coming so close to the point of conclusion, we are facing hurdles on the issues of Naga flag and constitution: Tuccu 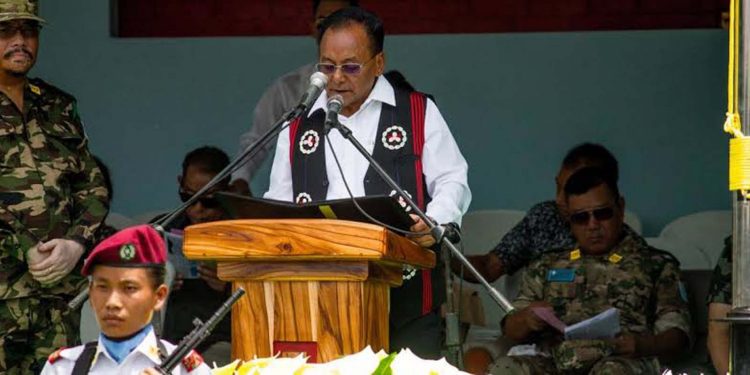 NSCN-IM chairman Q. Tuccu on Saturday said the Indian authorities which deal with the Naga talks are well informed that the Indo-Naga political solution without Naga flag and constitution is not conclusive and that it will create a room for future headache.

Clarifying the position of the political talks between the Centre and the National Socialist Council of Nagalim (NSCN), Tuccu in a statement said, “After coming so close to the point of conclusion, we are facing hurdles on the issues of Naga flag and constitution.”

The Centre and the NSCN-IM are in talks for more than last 22 years.

“We are looking for a lasting solution,” Tuccu said.

Tuccu’s statement follows Centre’s interlocutor for Naga talks and Nagaland governor RN Ravi’s remarks on Friday that the NSCN-IM had adopted a procrastinating attitude to delay the settlement by raising the contentious symbolic issues of separate Naga national flag and constitution.

Ravi also said “some NSCN-IM leaders through various media platforms are misleading the people with absurd assumptions and presumptions over what they have already agreed with the government of India”.

According to Tuccu, the Framework Agreement signed on August 3, 2015 is the meeting point for the two contending parties – the Indians and the Nagas – and the rallying point for the divided Nagas.

He hoped the Framework Agreement will certainly bring an honourable and acceptable solution to the long-drawn Indo-Naga political conflict as it addresses the security concern of India as well as the historical and political rights of the Nagas.

It will open up a new era of harmonious peaceful coexistence for the Indians and the Nagas, he said.

By virtue of the Framework Agreement, he said, the Nagas will coexist with the Union of India as two entities as different kind of flowers bloom together.

He mentioned that the Nagas at no point of time agreed to live within the Union of India and that all the interlocutors of the government of India acknowledged that fact.

Tuccu believed that every sensible and patriotic Naga will support the Framework Agreement since it is issue-based.

“We do not see any valid reason to go against it when the government of India and National Socialist Council of Nagalim have reached an acceptable solution that touches the heart of the matter,” he said.

The NSCN-IM chairman said the Naga people have reasons to appreciate and thank the prudent and accommodative Indian authorities, who are involved in the talks at various stages, particularly present Prime Minister Narendra Modi through whom the two parties could sign the historic Framework Agreement.

He said the Nagas are also deeply indebted to the NSCN-IM leadership late Isak Chishi Swu and Th. Muivah who took all the necessary troubles in bringing the issue so far.