Union Minister of State for Railways, Rajen Gohain, arrived in Kohima on Wednesday to review the on-going railways projects in Nagaland,

Gohain held separate meetings with Governor, P B Acharya, and Chief Minister, Neiphiu Rio on Wednesday immediately after his arrival.

After the meeting, Nagaland Chief Minister wrote in his official Twitter handle:

“Had a very fruitful meeting with Minister of State (Railways) @rgohainbjp to fast forward the Railway projects for Nagaland. Work on Dimapur- Zubza line to be expedited. Survey for Dimapur – Tizit line to be taken up. Also Amguri – Tuli line to be revived after study.”

Rio said the discussion with the MoS Railways revolved around expediting work on Dimapur-Zubza line, taking up of survey for Dimapur-Tizit line, among others. 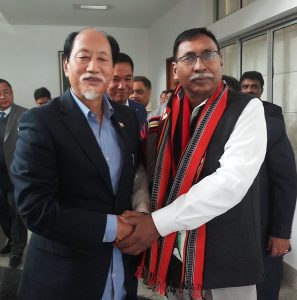 Rio also mentioned in his tweet that Amguri-Tuli line would be revived after study.

It is also learnt from official sources that requirements for land compensation and other technicalities will be processed after the completion of Tizit-Dimapur line land survey.

On Dimapur-Zubza line, it was discussed in the meeting that tendering would begin once the land compensation was fully paid,.

Further, on the Amguri-Tuli railway connectivity, sources said Gohain had given assurance once the required formalities are completed.