Rains cause damage across Nagaland 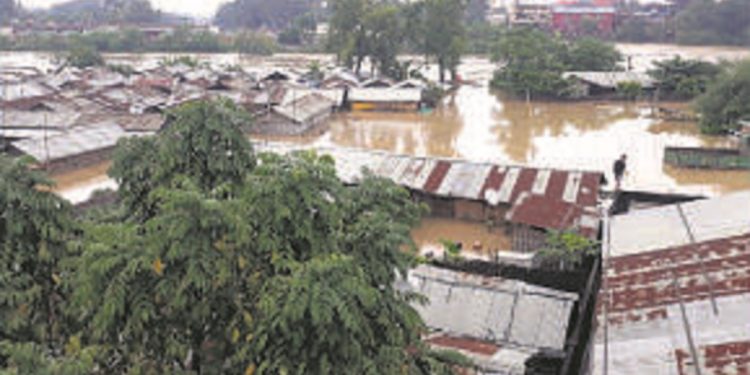 Incessant rains during the past 36 hours in Nagaland have caused extensive damage in many parts.

Two people have been reportedly killed while two others sustained injuries in Dimapur and Phek districts.

Over 8,000 people have been reportedly affected as 13 villages in Dimapur district have been flooded with many houses being submerged.

The teams of SDRF and Home Guard & Civil Defence rescued 131 people from three different locations, besides retrieving one body of a woman below New Dansiri bridge, authorities said.

Four houses at Sangtamtila were swept away by the floodwaters.

On the other hand, Phek DDMA has reported of a retaining wall collapse at New Colony in Phek town, in which two persons were injured while one body was retrieved by SDRF and Home Guards & Civil Defence team around 10:30 pm on Saturday.

They visited the flood-affected areas, including Naharbari, Darogajan and Ekhyo Yan, in Dimapur district to assess the situation on Sunday.

The chief minister handed over Rs 10 lakh to Dimapur DC for providing immediate relief in the affected areas, besides directing the latter to take other necessary steps.

The rapid damage assessment of Dimapur caused by the severe floods due to incessant rains on Saturday is being undertaken by Dimapur DDMA in collaboration with inter agency group of NGOs.

Meanwhile, in Naharbari area here, the Government High School and its surrounding areas has been fully submerged with even vehicles not being able to ply on the road.

According to NSDMA, the cyclonic circulation over western Assam area in lower levels of the atmosphere and moisture incursion over the Bay of Bengal had caused thunderstorm accompanied with lightening over the Northeast.