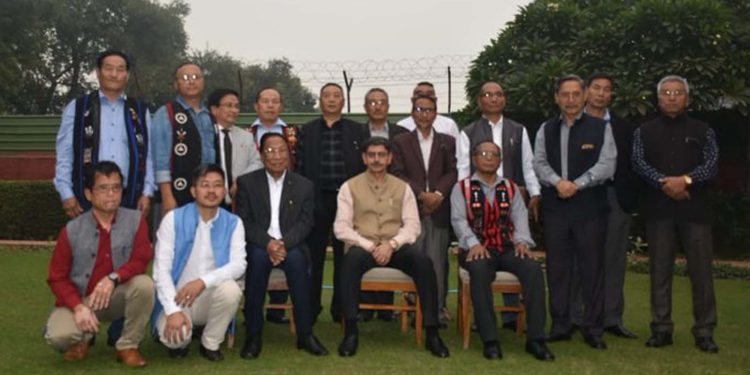 The People’s Democratic Alliance Legislature Party (PDALP) on Wednesday said the negotiating parties should make all possible efforts to come to an understanding and formulate a settlement for the Naga issue at the shortest possible time.

PDALP had a meeting at the State Banquet Hall in Kohima on Wednesday.

During the meeting, PDALP resolved to call upon the negotiating parties to expedite the peace talks and find out a political settlement that is honourable and acceptable to the people while upholding the democratic political rights of the Nagas.

It reminded that the government of India and the negotiating parties have been holding political dialogues under ceasefire for 23 years and have already signed agreements with the Naga political organizations.

The agreements include the Framework Agreement on August 3, 2015, the Agreed Position or Preamble with the Naga National Political Groups on November 17, 2017 and successful conclusion of talks was announced on October 31, 2019.

“Accordingly, the masses have been crying out for lasting peace through a negotiated political settlement which will pave the way for all round development and progress,” the resolutions adopted at the meeting said.

The PDALP also acknowledged the contributions of all the frontline workers who have been working round the clock for the past four months in battling the Covid-19 pandemic making significant sacrifices in the greater interest of the general public.

It appreciated the contributions and sacrifices of all sections including the medical fraternity, administration and police, all government agencies, tribal hohos, civil societies, church organisations, NGOs, political parties and individuals.

The PDALP said the people of Nagaland deserve to be complimented for extending all out cooperation in adhering to the guidelines, advisories and SOPs during the lockdown period. It also complimented the state government and all its agencies in successfully handling the challenges posed by the global pandemic.