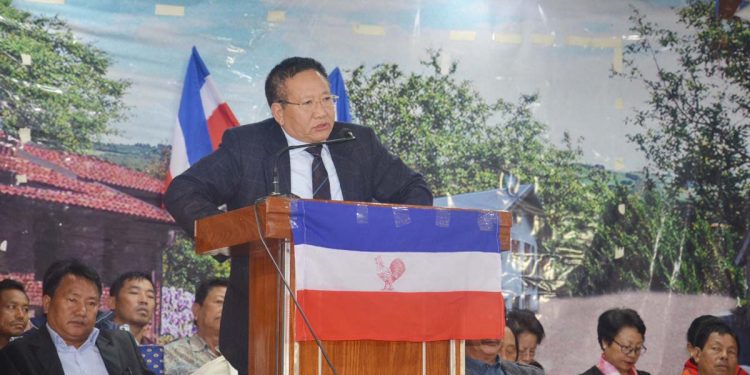 The Opposition NPF on Wednesday decided to boycott the 6th session of the 13th Nagaland Legislative Assembly scheduled for August 13, saying the one-day session has been convened for mere fulfilment of constitutional obligation.

In a letter to Speaker Sharingain Longkumer, the party sought to remind that the “dignity of the Nagaland Assembly and its democratic principles have been repeatedly abused on the pretext of implementing Covid-19 measures and in order to protect democratic practices and to maintain the sanctity of the House”.

The letter said the Speaker had recapped in his letter to the Governor vide D.O. NO. AS/HS/125/2020, issued on August 6, 2020, that a one-day session was declared following the Business Advisory Committee (BAC) meeting convened in the committee room of the Assembly secretariat on July 20.

“But the Speaker had failed to mention in the letter that the two NPF MLAs, Dr Chotisuh Sazo and Amenba Yaden, had requested him to have a three-day session while accommodating the proposal of the Opposition party for one-day discussion on each of the three issues of public importance namely Naga political issue.”

“Covid-19 and the Securitisation and Reconstruction of Financial Assets and Enforcement of Securities Interest Act, 2002 (SARFAESI Act 2002),” Imchen said.

He said after their request was turned down, the two NPF MLAs issued a communiqué the same evening terming the decision arrived at the BAC meeting as “discriminatory, unfair and unacceptable.”

The two NPF MLAs had brought the matter to the public domain through local dailies on July 21 for general awareness on how the present government had once again made “a mockery of democratic practices in the state”.

“Under such a paradigm, portraying the two NPF MLAs as being a party to the decision to hold a one-day session as per your letter to the Governor is one-sided and lacks precision,” the Opposition party said in the letter.

It further pointed out that Opposition leader TR Zeliang vide letter No. LO/CORR/SPKR-2020 issued on July 25, 2020, had proposed to the Speaker for extension of the session by a few more days so that the second day of the session can commence in August as deemed convenient post recess but the proposition went unattended.

Imchen said Zeliang was compelled to write to the Governor for extension of the business session to three days vide letter No. LO/CORR/GOVERNOR-2020 issued on August 1.

In the letter, he had proposed for extension of the business session to three days – one day each for discussing matters related to Naga political issue, Covid-19 and SARFAESI ACT, 2002.

He suggested the 6th session of the Assembly be convened for three days from August 11-13.

He also suggested that the commencement date of the session either be differed to a day after August 15 or its preponement to accommodate at least 3-day session or to commence the session on August 13 as scheduled and adjourn the House without sine die and resume for another two days after August 15 (post recess).

The Governor, in response to Zeliang’s letter, had written to Chief Minister Neiphiu Rio vide D.O No.G-01-02-1/18/Leg on August 3, a copy of which was also endorsed to the Opposition leader and the Speaker, indicating that the session should “be of adequate duration to enable it to deliberate over the pressing issues of Nagaland”.

Imchen said the Speaker instead of considering it reverted back to the Governor vide a letter, a copy of which was endorsed to the Opposition leader and the additional chief secretary to the chief minister, reaffirming the decision of holding a one-day session.

The NPF said as per Rule-58 of the Rules of Procedure and Conduct of Business in Nagaland Legislative Assembly, notice of an adjournment motion will be given at least one hour before the commencement of the sitting.

Imchen said though he had served the notice for adjournment motion two weeks prior to the scheduled date of the session it is most unfortunate that it went unattended.

He also said the Opposition MLAs filed 29 questions to be answered during the 6th session of the Assembly but only 12 questions were accepted by the Assembly Secretariat while the time duration allotted to the Opposition bench for discussion on matters related to Covid-19 was a mere 35 minutes which by all standard is insufficient.