No central aid yet to tide over natural calamity: Nagaland CM 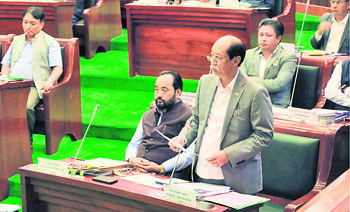 Nagaland Chief Minister Neiphiu Rio on Tuesday told the State Legislative Assembly said that the Centre had not provided any fund to the State Government so far in view of the recent natural calamity that had devastated the State.

Replying to queries on the first day of the Assembly session, Rio, who is also the leader of the House added that, however, public contribution towards Chief Minister’s Relief Fund was Rs 4,69,24,536.83.

Replying to an unstarred question by Opposition member Muthingnyuba Sangtam on utilization of Chief Minister’s Relief Fund, Rio said the amount received as contribution from individuals and NGOs were being used in providing relief and rehabilitation and as ex-gratia to affected families, besides meeting the critical gaps not covered under National Disaster Response Fund (NDRF).

On the details of 4,000 people affected by the natural calamity as sought by the MLA, Rio said the detailed list of affected persons was under compilation by respective districts and a consolidated final list was yet to be received.

The Chief Minister, however, clarified that the number of affected people was more than 4000 since the entire Kiphire district and several administrative sub-divisions in all the districts had been severely affected.